Egyptian Dictator, Hosni Mubarak, has given up hope,
John “Hawk” Murtha and the democrats have given up hope,
The Mainstream Media gave up hope a long time ago,
But… Iraqis continue their struggle for democracy.

Three years after the fall of the Hussein Regime, Iraq focuses on unity and security. 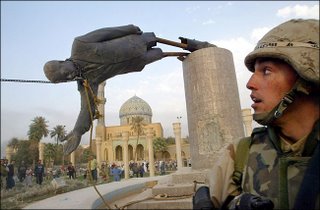 As the media paints a picture of Civil War, the terrorists in Iraq continue to murder innocent civilians. The worst massacre of the year on Friday was blamed on Al Zarqawi and his thugs and NOT on sectarian division.

After the suicide bombings yesterday at the Buratha mosque in Baghdad that killed over 70 people, Shiites protested for unity today in Iraq,
FOX VIDEO HERE 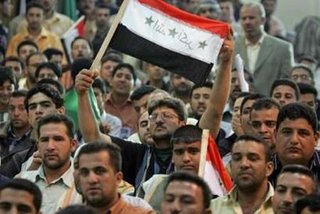 A Shi’ite man holds an Iraqi flag during a demonstration to protest Friday’s deadly mosque bombing in Baghdad April 8, 2006. Three suicide bombers dressed as women killed at least 71 people at a Shiite mosque on Friday, the bloodiest attack in Iraq for at least three months. The mosque belonged to SCIRI, the most powerful group inside Iraq?s ruling Shiite Alliance. (REUTERS/Ali Jasim)

After the suicides attacks on the Buratha mosque in Baghdad on Friday, Shiites protested against Al Zarqawi and vowed not to be drawn into a Civil War:

After the suicide attack committed at a Shiite mosque in the Iraqi capital Bagdat (Baghdad), Shiites took protests to the streets.

Thousands of Shiite gathered at central Baghdad today and have started to march towards the bureau of Shiite leader Abdel Aziz al Hakim, who is expected to deliver a speech about yesterday’s carnage that left 79 people dead and 138 wounded.

Freedom for Egyptians has a few chioice words for Mubarak after his comments on Iraq. 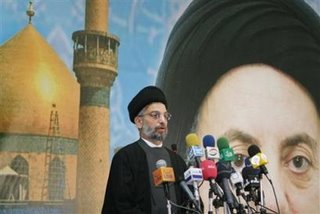 Abdul Aziz al-Hakim, the leader of the Supreme Council for the Islamic Revolution in Iraq addresses a gathering of Iraqi Shiites who were protesting Friday’s suicide bombing of a mosque Saturday April 8, 2006 in Baghdad, Iraq. Hakim said, that he would not be deterred from the political process by violence and that ‘Our people will not be drawn into the trap of civil war.'(AP Photo/Karim Kadim)

Omar at Iraq the Model explains the significance of the bombings yesterday at the Buratha mosque in Baghdad. Omar says the ramifications of targeting this specific Shiite mosque may be very serious. 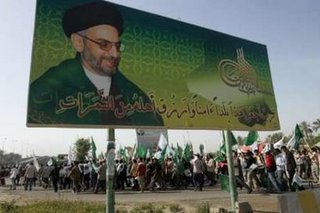 Shi’ite men march past a billboard of Abdul Aziz al-Hakim, leader of the Supreme Council for Islamic Revolution in Iraq (SCIRI), during a demonstration to protest Friday’s deadly mosque bombing in Baghdad April 8, 2006. Three suicide bombers dressed as women killed at least 71 people at a Shi?ite mosque belonging to SCIRI on Friday, the bloodiest attack in Iraq for at least three months. (REUTERS/Ali Jasim)

Meanwhile, today Representative Murtha told the City Club in Cleveland that the war in Iraq is lost.

(This post was updated and moved to the top today.)

Interesting observations at American Digest.
Michelle Malkin has a nice roundup of blogger reaction to the Iraqi Liberation Day.
Winds of Change notes that this day will go down as the “end of the rapists on the payroll” day.
Ali Al-Zahid has a moving piece “Standing Firm” at National Review.
Prairie Pundit weighs in on this historic day.
Pajamas Media– “Shiites March Against Terrorism”