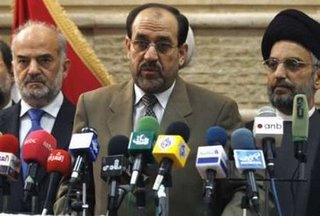 Iraqi politician Jawad al-Maliki (C) stands with embattled Iraqi Prime Minister Ibrahim al-Jaafari (L) and Shia leader Abdul Aziz al-Hakim during a news conference in Baghdad April 22, 2006. Maliki, a top official in Iraq’s oldest Islamist party, was nominated by the Shi’ite Alliance on Friday to head the next government after his close ally Ibrahim al-Jaafari caved in to pressure from Kurds and Sunnis to step aside. (REUTERS/Thaier Al-Sudani)

After months of deadlock, the Shiites get the go ahead for Jawad al-Maliki to form a new government on Saturday:

Parliament elected President Jalal Talabani, a Kurd, to a second term and gave the post of parliament speaker to Mahmoud al-Mashhadani, a Sunni Arab. Al-Mashhadani’s two deputies were to be Khalid al-Attiyah, a Shiite, and Aref Tayfour, a Kurd.

The tough-talking al-Maliki was nominated by the Shiites on Friday after outgoing Prime Minister Ibrahim al-Jaafari gave up his bid for another term. Al-Jaafari’s attempt to stay in office was adamantly opposed by Sunnis and Kurds, causing a monthslong deadlock while the country’s security crisis worsened in the wake of December’s election.

U.S. and Iraqi officials hope that a national unity government representing Shiites, Sunnis and Kurds will be able to quell both the Sunni-led insurgency and bloody Shiite-Sunni violence that has raged during the political uncertainty. If it succeeds, it could enable the U.S. to begin withdrawing its 133,000 troops.

Al-Maliki has a reputation as a hard-line, outspoken defender of the Shiite stance — raising questions over whether he will be able to negotiate the delicate sectarian balancing act.

From exile in Syria in the 1980s and 1990s, he directed Dawa guerrillas fighting Saddam Hussein’s regime. Since returning home after Saddam’s fall, he has been a prominent member of the commission purging former Baath Party officials from the military and government. 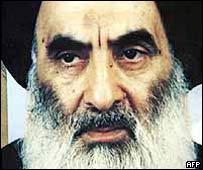 Ayatollah Sistani has been a quiet yet powerful voice in post-Saddam Iraq. (BBC)

And, once again, it is the powerful cleric, Grand Ayatollah Ali al-Sistani, who saved the day for Iraq:

Al-Jaafari had stalwartly rejected pressure to give up the post until Iraq’s most powerful Shiite cleric, Grand Ayatollah Ali al-Sistani, sent word that he should go. On Thursday, al-Jaafari gave the alliance the go-ahead to pick a new nominee.

Why has this man not received a Peace Prize?

Shia leader Abdul Aziz al-Hakim of the Supreme Council for the Islamic Revolution in Iraq addressed a gathering of Iraqi Shiites protesting a massive suicide bombing of a mosque Saturday April 8, 2006 in Baghdad, Iraq. Hakim said, that he would not be deterred from the political process by violence and that “Our people will not be drawn into the trap of civil war.”

Powerline has an interesting observation on the latest devlopments.

Pajamas Media is reporting on the opening session of Parliament today.

And, via Pajamas… Iraq the Model liveblogged the session today! 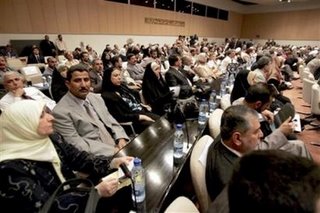 Iraqi parliament delegates follow proceedings as members of the new parliament are sworn in during the first session of the Iraqi parliament at the heavily fortified Green Zone in Baghdad, Iraq, Saturday, April 22, 2006. A breakthrough in months of political deadlock cleared the way Saturday for Iraq’s parliament to launch the process of putting together a new government. (AP Photo/Ali Haider)

Check out what ITM says about Mahmoud Mashhadani… 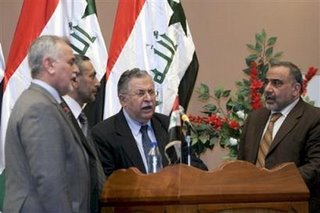 Some important points from Mashhadani’s speech:

1-We will not let sectarianism lead the people of Iraq to internal fighting.
2-Consitution is the reference but this constitution is amendable and subject for improvement when necessary (indicates a desire to amend some articles).
3-We will not allow the marginalization of any group or segment of the people.
4-The legislative authority will not be an obstacle in the face of the executive authority but rather a watching eye.
5- Building and reforming the armed forces on basis of loyalty to the nation.

Wizbang has reaction from Secretary of State Rice.

Jim Hoft
Jim Hoft is the founder of The Gateway Pundit, one of the top conservative news outlets in America. Jim was awarded the Reed Irvine Accuracy in Media Award in 2013 and is the proud recipient of the Breitbart Award for Excellence in Online Journalism from the Americans for Prosperity Foundation in May 2016.
NY Attorney General Letitia James Threatens to Sue Trump Over Possible Military Deployment to Save Looted and Destroyed New York City
"I Honor Her. She is Such a Good Human Being" - Mayor De Blasio Responds to His Daughter's Arrest at Weekend Protests
Looters Murder Retired St. Louis Police Captain at City Pawnshop - Then Loot the Store (VIDEO)
Peaceful Protester Arrested in Chicago After Filming Himself Handing Out Bombs at MN Riots and Posting on Facebook (VIDEO)
Philly Gun Store Owner Blasts Would Be Thief with AR-15 During Attempted Looting - One Dead (VIDEO)
See more...