Iran Says It Will Share Nuclear Technology, Tells Jews to "Get Out!"

* He again warns the Jews to Get Out! of Israel and go back to where you came from
* He tells Germany to stop being threatened by the Zionists
* He hints that Iran may leave the Nuclear Nonproliferation Treaty
* He threatens to hide Iran’s nuclear program
* He threatens to share Iran’s nuclear technolgy during a meeting with the “Genocide President”, Omar Hassan Al Bashir, from Sudan

He does have a way with words!

Ahmadinejad stands in front of another strange back drop of doves and glowing globes for a speech about wiping Israel off the map. 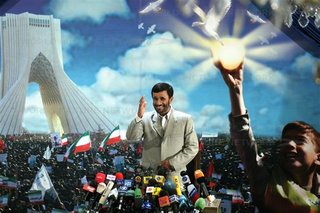 Iranian President Mahmoud Ahmadinejad during a press conference in Tehran, Iran, on Monday, April 24, 2006. Ahmadinejad hinted during the press conference that Iran was considering withdrawing from the Nuclear Nonproliferation Treaty and predicted the U.N. Security Council would not impose sanctions on Tehran. (WPN)

On Monday, Iranian President Mahmoud Ahmadinejad told Jews to get out of Israel and leave the land for the Arabs. “Speaking at a press conference in Tehran the day before Holocaust Remembrance Day, he reiterated his claim that Israel must not be allowed to exist.”

After a visit by the Sudanese President on Tuesday, Iran said it would share it’s nuclear technology with the world:

Iran is ready to share its nuclear technology with other countries, Supreme Leader Ayatollah Ali Khamenei said after talks on Tuesday with the visiting Sudanese president, state television reported. Iran is embroiled in a nuclear standoff with the West, which fears Teheran is secretly developing atomic weapons, which could be transferred to terrorist groups or spark an arms race in the Middle East.

Iran insists it only wants nuclear technology for peaceful purposes, such as producing electricity.

“The nuclear strength of the Iranian scientists is an example of several scientific currents in Iran that are going ahead, and the Islamic Republic of Iran is ready to transfer the experience, science and technology of its scientists,” state television quoted Khamenei as saying.

He was speaking after talks with visiting Sudanese President Omar Hassan Al Bashir.

Iran also threatened on Tuesday to hide its nuclear activity if the West takes any harsh measures against it.

“I am sure that the Islamic Republic of Iran is not producing nuclear weapons and this is an accusation by the U.S. in order to pressure and intimidate.” Chavez added: “I had close ties with Mohammad Khatami, whom I consider to be like a brother and now I enjoy close ties with his successor, president Mahmoud Ahmadinejad, whom I also think of as a brother.”