Iran says that it is training suicide bombers in case of a military attack,
FOX VIDEO HERE 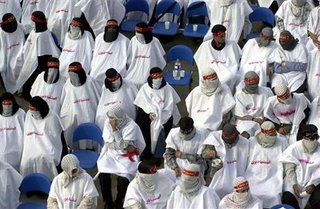 More than 200 young men and women presented themselves last spring as volunteers to carry out suicide bomb attacks against Americans in Iraq and against Israelis.

Iran continues to threaten US; this time with 40,000 suicide bombers:

Iran has readied an “army” of 40,000 suicide bombers to strike targets all over the Western world and Israel as a response to a possible attack on their nuclear facilities, the British Sunday Times reported Sunday morning.

Two senior officials from the Homeland Security Agency, who spoke on condition of anonymity, agreed with the prediction and warned that Iran could set a worldwide terror network into motion in the US and elsewhere.

They added that an attack on Iran would be much more dangerous to the US than was the strike on Iraq.

The Sunday Times also procured a tape of Dr. Hassan Abasi, head of the Iranian Center for Strategic Studies. He warned that Iran was ready to strike “sensitive American and British targets” if its nuclear facilities were to be attacked.

Say hello to a nuclear Iran:

With projections that Iran could develop a nuclear bomb within the next two-and-a-half years, a high-ranking IDF officer from Military Intelligence told The Jerusalem Post over the weekend that the successful enrichment of uranium announced last week proved that diplomatic efforts to stop Teheran’s race to the bomb had failed.

“The way it looks now, it is doubtful that the United Nations and the international efforts will succeed in stopping Iran,” the high-ranking officer said. “Iran spit in the world’s face but the world hasn’t done anything.”

Hassan Abassi is thought to be the strategic brain of the Iranian mullacracy.

The bombers do get to choose their location:

The world got its first look at the Special Unit of Martyr Seekers in the Revolutionary Guard in March during a parade.

Volunteers for the special force were asked which they preferred, carrying suicide attacks out in Iraq or Israel, The Sunday Times said.