Get the reporters at the New York Times and the Washington Post lined up and ready to go. Call Time and Newsweek! There’s a big story at a VERY BIG refugee camp!

What are you waiting for, Central Command???… Get them choppers in the air! These people need to eat!

The New York Times latest is about displaced families in Iraq:

A new estimate by one of Iraq’s vice presidents has put the number of families who have fled their homes at 100,000, a number far greater than recent projections by other Iraqi officials and one that further clouds the debate over how deeply sectarian conflicts are affecting the nation.

This would be very, very frightening…
If it were true!

As Prairie Pundit points out, the story published in the New York Times is a far cry from the report two days earlier presented by Maj. Gen Rick Lynch and posted at the Official Website of the Multi-National Force Iraq:

Another indicator for civil war would be forced population movements. And we are extremely sensitive to that. We see reports of tens of thousands of families displaced here in Iraq, and we chase down each and every one of those reports. And I’ll show you detail in a minute. But we have seen some displacement, pockets of families moving, but not in large numbers….

Here is the official map of IDP camps in Iraq… 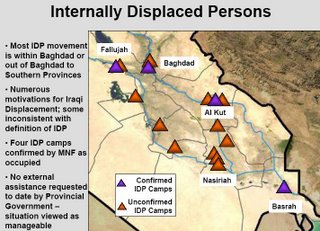 And then when we got the report of 500 families displaced in Basra, we went to confirm, and all we could find was 43 families. So there is indeed indications of displaced persons inside of Iraq.

Prairie Pundit has much more on Maj. Gen. Rick Lynch’s discussion on the signs of civil war in Iraq.

And, here’s another clue that there are not 100,000 displaced Iraqi families.

Do you really think it is possible for 100,000 families to slip under the radar of the AP, New York Times, Washington Post, Newsweek, Time, CNN, Los Angeles Times, etc.?

After all, that’s Pullitzer Prize winning material just sitting out there ready to be lapped up!

But, its going to be kinda hard for even the AP or NYT to spin 43 families outside Basrah as a massive humanitarian crisis.

You would think the New York Times would do a bit of research before they printed this article. Like they could have maybe looked back 2 days to see what the Major General had to say, or they could have opened their computers before they published such garbage. You would think they would do a little research to find all of those roaming refugee families in the Iraqi desert!

Sadly, it’s stories like this that make Americans think that the New York Times may be slightly anti-American.

Andrew Sullivan seems like a nice fellow, but someone ought to send him this information so that he can correct his posting from today.