“If a million people send $10 each, that’s enough to build about 300 miles of fencing under the plan that we’ve devised.”

The Minuteman Project already has surveyors and contractors offering to help.

“If you will build it, they won’t come.” 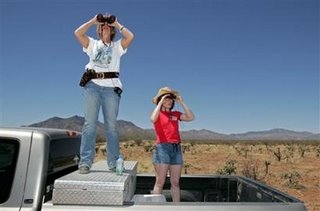 Carmen Mercer, left, of Tombstone, Ariz., and Lisa Hall of Chicago patrol the southwestern desert near Sasabe, Ariz. Wednesday, April 12, 2006. Both women are part of the Minuteman Project monitoring the border from California to Texas in April. Mercer, originally from Germany, became a U.S. citizen in 1999. (AP Photo/Matt York)

The Minutemen Project will be breaking ground on a border fence paid for by private donations in late May:

If the government doesn’t build a security fence along the Mexico border, Minuteman Project border watch leader Chris Simcox says he and his supporters will.

Simcox, whose civilian watch group opposes illegal immigration, said Wednesday that he was sending an ultimatum to President Bush to deploy military reservists to the Arizona border by May 25 or his supporters would break ground on their building project.

“We’re going to show the federal government how easy it is to build these security fences, how inexpensively they can be built when built by private people and free enterprise,” Simcox said.

Congress has been debating an immigration overhaul for months. One bill, approved by the House in December, calls for nearly 700 miles of fence along the U.S.-Mexico border. The proposal has angered Mexicans; Mexico President Vicente Fox called it “shameful.”

Simcox said half a dozen landowners along the Arizona-Mexico border have said they will allow a fence on their land, and others in California, Texas and New Mexico have agreed as well.

He said surveyors and contractors had offered to help, and that some had said they would provide heavy equipment for his group to build the fence.

The Minuteman Project is collecting donations for the project:

One Minuteman spokesperson estimated the fence would cost $10 million to $12 million, to start. He said $10,000 in donations were pledged in one day.

Also in the news, the ACLU just lost a case to evict the Minutenmen from state trust lands.