If they wanted a cave-in, they should have threatened Old Europe! 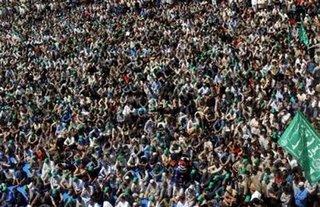 A crowd of supporters of the Islamic group Hamas gather as they listen to Palestinian Authority Prime Minister Ismail Haniyeh, at the Jebaliya refugee camp, northern Gaza Strip, Friday April 14, 2006. Haniyeh said Friday that the suspension of Western aid to the cash-strapped Palestinian Authority would not bring down his Hamas-led government nor cow the Palestinian people. Thousands of Palestinians joined Hamas-organized rallies in Palestinian towns throughout the West Bank and the Gaza Strip on Friday to show their support for the government. (AP Photo/Khalil Hamra)

From the mosques of Gaza…

During Friday prayers, Palestinian PM Ismail Haniya said that if the West continued to deny Hamas funding, there would suicide attacks against in the heart of Israel:

Palestinian PM Ismail Haniya said the West would not succeed in isolating the government because it had the full support of Palestinians.

The European Union and the United States have cut off all economic support for the government because Hamas refuses to renounce violence and recognise Israel.

Mr Haniya delivered his defiant and passionate address to thousands of supporters gathered at the main mosque in the Jabaliya refugee camp, the BBC’s Alan Johnston in Gaza says.

The Palestinian prime minister said there would be, as he put it, no surrender, no buckling to the demands of Israel and the West.

“We will eat salt, but we will not bow our heads for anybody other than God, because we are faithful to the rights of our people and our nation. We will not betray it,” he said.

After his speech, Mr Haniya joined thousands of Hamas supporters who thronged the streets.

Earlier, at another big demonstration in the south, another Hamas leader had warned that if the party’s government was broken by its enemies, Hamas would go back on the offensive.

Younes al-Aftal, a Hamas MP, said there would be Hamas suicide bombings again in the heart of Israel.

Since Palestinian people blow up their own children and preach “Shahada” at their public rallies, DISTURBING VIDEO HERE (Via Stand With US), you can bet they are ready to continue the suicide attacks against Israelis.