“Something that perhaps the average American just doesn’t understand is that there is a heightened sense of a lack of appropriateness being there for members who are elected who happen to be of color, and until this issue is addressed by the American public in a very substantive way, it won’t be the last time.”

But soon enough Cynthia McKinney may understand that striking an officer is against the law even for Democratic Representatives.

Much ado about an uppercut! 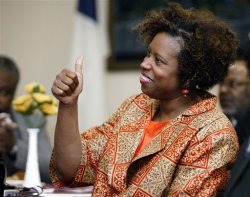 The case against Cynthia McKinney will be go to a grand jury on Thursday, sources are saying:

Federal prosecutors have decided to present the case, and the grand jury will begin hearing testimony Thursday, the two sources said.

The Justice Department and the U.S. attorney for the District of Columbia, which is handling the case, refused to comment.

James Myart, one attorney representing McKinney, said he has no knowledge of a decision for a grand jury to consider the matter.

McKinney on Wednesday deflected questions about the confrontation with a police officer in the U.S. House of Representatives, while the Capitol Police chief said the lawmaker should have avoided the incident.

But, as Cynthia rants about her new hairdo and racism, the Capitol police don’t think this assault incident is a bad hair joke. After all, it wasn’t that long ago that they lost a couple of their brothers in a similar display:

The suspect allegedly set off metal detectors while trying to go through the document door, a “Member’s only” entrance, and then began to run from pursuing police. The suspect then reportedly went on a shooting spree around the crypt area of the Capitol which is located on the ground floor under the rotunda.

Senator Bill Frist (R-TN), who is a physician by trade, heard the television reports as he left the Dirksen Senate Office Building. Frist called the Attending Physician’s office at the Capitol to see if he was needed and immediately started running to the Capitol building which is about a four minute jog, a spokesperson told CNS. The Senator attended to one of the victims and the suspect and was able to resuscitate the two and accompany them to the hospital.

The Capitol building was filled with summertime tourists as Congress had just wrapped up the day’s business and many members were about to return to their districts. DeLay’s Press Secretary Mike Scanlin said he was not in the office when the shooting took place but said from what he is told by his co-workers, it was virtually a “shoot-out” type atmosphere as the suspect reportedly burst into DeLay’s office and was confronted by a plain-clothes officer assigned to the Congressman’s security detail. After the shooting Rep. DeLay was advised by security to continue his scheduled trip to Houston, Texas.

Some witnesses said the shots went on for two to three minutes.

The suspect is described by multiple news media as a white, heavy-set, middle aged man.
Scanlin said the officer did a great job stopping the gunman despite being shot in the leg and back. Asked about the integrity of the Capitol Police security measures, Scanlin said, “One complaint that we get here is security here is too tough.”

Fellow democrats are distancing themselves from Representative McKinney but are yet to condemn her assault on the Capital Hill Police. 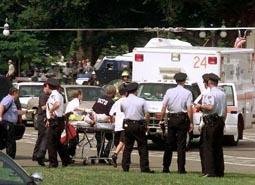 A U.S. Park Police helicopter waits on the grounds of the Capitol Friday, July 24, 1998 after two policemen, a female tourist and a suspected gunman were wounded in an exchange of gunfire inside the Capitol. A Capitol police officer is on the stretcher being rushed to the waiting helicopter. (AP)