Freedom for Egyptians, reporting from Egypt, sends this shocking news. 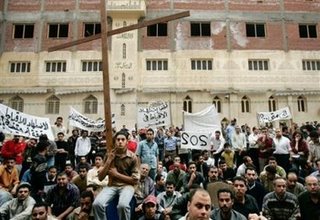 Angry Egyptian Copts, one holding a large wooden cross, gather outside the Saints Church in the Sidi Bishr district of Alexandria in Egypt Friday, April 14, 2006, after a knife-wielding assailant attacked worshippers at Coptic churches in the northern Mediterranean city of Alexandria during Mass, killing one person and wounding at least five before he was arrested, the government said. Banner reads: ‘ Stop The Persecution of the Copts’. (AP Photo/Ben Curtis)

The simultaneous incidents took place during Friday Mass. Police say they have three men in custody.

Hundreds of Christians had gathered outside the churches in protest at the attacks, the agency said.

According to police reports, two people armed with knives attacked three churches. A third man was prevented from entering another church by security guards. 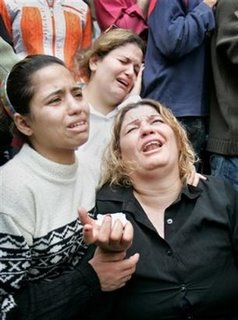 Egyptian Copts grieve outside the Saints Church in the Sidi Bishr district of Alexandria in Egypt Friday, April 14, 2006, after a knife-wielding assailant attacked worshippers at Coptic churches in the northern Mediterranean city of Alexandria during Mass. (AP Photo/Ben Curtis)

The Jawa Report has more on the strange reporting of these attacks today.

Gates of Vienna has even more startling reports on today’s events. It is amazing that these three reports at Gates of Vienna are all talking about the same events!

You have to love this reporting at CNN:

Coptic Christians, who account for about 10 percent of Egypt’s 72 million people, complain of discrimination in getting jobs, particularly in senior levels of government. They generally live in harmony with the Muslim majority, although violence flares occasionally.

How many nuns need to get knifed? How many Churches need to burn? How many worshippers need to fear for their lives? How many children must be murdered?… before the AP/CNN notices the Islamic Killer Elephant in the Church door? 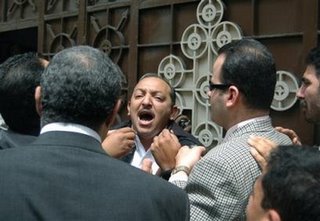 The unidentified son of a victim who was killed, reacts at Egyptian security at the Saints Coptic Church in the city of Alexandria, Egypt Friday, April 14, 2006. (AP Photo)

Egyptian Sand Monkey believes there must be more to the story by the strange reports he is seeing in the media.

Dog Pundit has more on the violence today.