Getting America Right – Is Right on Time!

Here is a review of an exceptional book that could not have been published at a better time:

This book by J. Fuelner, President of the Heritage Foundation, and Doug Wilson Chairman of Townhall.com looks at the current chaos created in Washington resulting from the collapse of liberal dominance in government. In the past several years we’ve witnessed the collapse of the liberal political machine where today the only branch of government the liberals control is the West Wing where a Commander in Chief has quickly turned into a lame-duck.

The liberal media is in ruins. The liberal blogosphere is way too far left for anyone living outside the San Francisco city limits. The New Media of talk radio, conservative blogs, FOX News, etc. dances circles around the illogical positions and arguments from the Left. The liberal media’s response has been to become more savage with their attacks and more severe with their slant which is driving profits into the ground. How long the liberal media giants will be able to maintain is uncertain.

Even the stranglehold the liberals have had on education is now challenged. Who would have thought that fake indians, Taliban students and Bush-bashing teachers would be outed from the safety of their liberal academic establishments. This is the best of times for conservatives and Republicans! 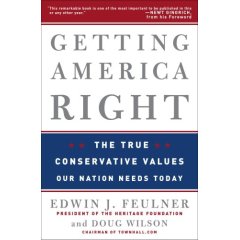 Without the liberal dominance, there was a vaccuum left in the American political landscape. Republicans moved in but many now argue they have lost their way. “Getting America Right” offers hope and guidance for this New Day in America.

Certainly, their are wonderful things we are witnessing today in our world. Today’s world has more democracies than ever (and a nice breakthrough in Nepal this week!). The George Walker Bush presidency has helped spread democracy to countries that never would have dreamed of it four years ago. Tax cuts have made the economy strong despite uncertainty and threats in today’s world. Consumer confidence is high, unemployment is lower than the average in the 70’s 80’s or 90’s.

But, there is much more that can be done for the future of the country. This book addresses the difficult issues the country is now facing from immigration to outlandish government debt and spending. It covers a lot of ground and a lot of pork. The constant reminder of runaway government spending is sure to please many conservative pundits out there. The book asks the question that we need to be reminded of continually about our mission in Iraq today, “Does it make us safer?” There is even a section on the infringement by government on personal rights. Obviously, this book is a timely read for this critical time in American history.

When I first picked up Getting America Right I was afraid it was going to be a stoning of Republicans and conservatives. I get enough of that in the media. Instead I came away feeling empowered. Fuelner and Wilson lay out an intelligent 6 point plan to steer America back to a direction of greatness. The authors spell out practical steps that we must take as a nation to get our country back on the right track.

After decades of liberal thought and policy, Republicans at times appear to be acting more like liberals with big government, open borders, pork, more pork, waiting for the Left to help fight the terror war, etc. Getting America Right helps us get past that.

You’ll have to check it out. I’m sure you’ll agree.

Getting America Right – Get’s It Right!

You can pick up a copy of Getting America Right at Amazon.com CLICK HERE