As if the Senate’s 2004 bipartisan Report on the U.S. Intelligence Community’s Prewar Intelligence Assessments on Iraq and the Butler Report from Great Britain never exposed Joe Wilson as a lyar, Joe Wilson continues to talk smack with Wolf Blitzer in Monday’s interview in The Situation Room.

The Brad Blog has the video on the interview with Wolf Blitzer on CNN’s Situation Room.

Former Ambassador Joe Wilson still gets respect from Wolf Blitzer, CNN, and the Left even though he has been caught lying in both American and British investigations. 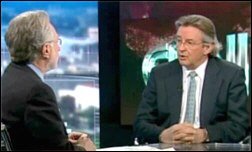 The former United States ambassador, Joe Wilson, is here in THE SITUATION ROOM to talk about these latest developments.

Mr. Ambassador, welcome back to THE SITUATION ROOM.

JOSEPH WILSON, FMR. U.S. AMBASSADOR: Good to be with you.

BLITZER: What do you think of the president’s explanations?

WILSON: Well, let me just correct one part of that package, first of all. The full body of the NIE, the national intelligence estimate, had it been released, would have demonstrated, as has been reported over the weekend, that, in fact, a good part of the intelligence community, intelligence community management felt that the allegation that Saddam had purchased, tried to purchase uranium from Africa was baseless. And indeed, there’s recently been the leak of a national intelligence officer report that was done three weeks before the State of the Union Address which uses that term, this allegation is baseless.

So, it’s important to understand that the full NIE would have demonstrated the accuracy of the report that I filed and the article I wrote in “The New York Times”. Now…

This is, of course, is Joe Wilson’s historic lie that he continues to slide by the liberal media. Joe Wilson did not “debunk” the claim that Iraq was seeking uranium. In fact, most intelligence analysts believed his trip “lent more credibility” to reports that Iraq was seeking uranium from Niger. (Senate’s 2004 bipartisan Report, Conclusion 13, page 73)

BLITZER: But there was a debate, though, among analysts over the British assertion, British intelligence that the Iraqis were seeking enriched uranium from Niger.

WILSON: If you look at…

BLITZER: Because the British apparently still believe that.

Here, Joe Wilson admits at least that the Brits believed their own intelligence as was later published in the Butler Report in 2004, pages 123 and 125.

And the British really, if they do still believe it, have an obligation to share that information with the International Atomic Energy Agency,(?) as is called for in U.N. Security Council Resolution 1441. But, in fact, in October of 2002, almost four months before the State of the Union Address, the Senate Select Committee on Intelligence itself was told by the deputy director of Central Intelligence that the judgment of the American intelligence community was that the British had stretched the case, and within four days the director of Central Intelligence had communicated at the White House three times.

President Bush mentioned “British Intelligence” in his address, something the Brits have always maintained.

Joe Wilson’s argument from this interview with Wolf is weak(1) as were his conlusions after he was busted by the Senate Intelligence Investigation.

BLITZER: They later acknowledged, even the White House.

WILSON: Right. So let’s be very clear on this.

BLITZER: Those 16 words that the president used in his State of the Union Address should not have been…

That’s crap! His editorial only drew attention to himself further as he wanted it to be. The talks he gave against the president the month before the reports were not enough. He had to write an editorial in the New York Times misrepresenting his findings, discrediting the president, blasting the war efforts, and drawing attention to himself… which is what his aim was all along.

But getting to the president’s statement…

BLITZER: Before — well, go ahead and respond to the president’s statement.

WILSON: Well, I have — I would like — I believe, in fact, that — that it is probably in the interest of the American public, and certainly I think it’s in the interest of the president and the vice president to be very direct with the American people exactly what happened during that time frame. My view is that they should probably release the White House transcripts of their testimony to Mr. Fitzgerald. There’s a precedent for doing that, and I would fully expect that the White House transcripts of their conversations with Mr. Fitzgerald would make very clear…

…BLITZER: But that would be OK with you, if they just came out and gave a full explanation without releasing the transcripts?

Vice President Gore released the transcripts of his conversation with the special prosecutor in 2000, for example. And, indeed…

BLITZER: On which issue?

WILSON: I think it was probably the Buddhist temple issue, but you can go back and take a look at it.

BLITZER: But that issue had been resolved, right, after…

WILSON: No, I think it was after he gave his testimony, actually.

BLITZER: Even while it was under — all right.

“I have concluded that a special counsel is not warranted,” Reno said.

The recommendation stems from fund-raising irregularities during the 1996 election and whether Gore made false statements during an April interview with Justice Department investigators.

Asked about his questionable Buddhist Temple appearance, Gore said, “I sure as hell did not have any conversations with anyone saying this is a fund-raising event.” Instead, he called the event “finance-related.”

On the topic of fund-raising coffees, Gore first said he attended none, then later admitted he attended four and held 21 of his own. The attorney general found no evidence of criminal intent.

Dr. Sanity had a diagnosis for Joe Wilson and the lot back in February.

Of course, this whole new episode of talk show appearances by Leftist Joe Wilson is really about recycling news in the mainstream as Powerline pointed out, yesterday.

Senator Grassley had this to say on the real leak scandals that have hurt our country from a public hearing last month:

“I don’t hear as much about public outcry about this [the NSA] leak as I did about Valerie Plame and the White House disclosures of her — or presumed disclosures of her identify of a CIA agent. And to me that’s a two-bit nothing compared to this sort of issue that we have before us of this information being leaked to the press.” – SENATOR GRASSLEY

Here is a part of Joe Wilson’s letter mentioned above:

Lorie Byrd is upset with the latest frog march for Joe Wilson at the New York Times today.

Jim Hoft
Jim Hoft is the founder of The Gateway Pundit, one of the top conservative news outlets in America. Jim was awarded the Reed Irvine Accuracy in Media Award in 2013 and is the proud recipient of the Breitbart Award for Excellence in Online Journalism from the Americans for Prosperity Foundation in May 2016.
Matteo Salvini sends 4th of July Greetings to President Trump: "All Lives Matter, Black and White!"
Atlanta Mayor Finally Calls for Protesters to Clear Out Area where Rayshard Brooks was Killed After 8-Year-Old Baby Girl is Murdered (Video)
WaPo asks Top Medical Elites If They Would Let Their Kids Go to BLM Protests -- They All Say Yes Except Fauci Who Delected the Question
Former Obama White House Physician: "I Think He's Got Some Cognitive Issues" (Audio)
Report: Epstein's Cohort Ghislaine Maxwell is ready to Name Names in Pedo Scandal (VIDEO)
See more...