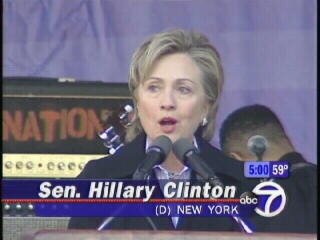 …But, it was democrats voted down removing the felony language from the bill!

Sen. Hillary Clinton to protesters: “I want to thank you for raising your voices and joining with people all over America to ask for fairness.” (70 Online) Well, Congress, or somebody needs to decide what fairness looks like for 12 million people who have snuck into the country!

The dems may have been on a recruiting mission at the protests yesterday, but not all Latinos are in favor of the democratic amnesty plan for illegal immigrants.

The protests may be designed to give the impression that all Latinos are in support of illegal immigrants. This is not the case:

“That’s the objective of the marches — to give the impression that all Latinos are for allowing the illegals to become citizens,” said Phoenix resident Lionel De La Rosa. “Well, I’m not.”

The 71-year-old Texas native and Vietnam veteran said he favors punitive measures more in line with the immigration bill passed by the U.S. House in December that would have made it a felony to be in the United States illegally.

“I’m for that 100 percent,” he said. “As far as my Latino friends are concerned, they all agree on this.”

A 2005 survey by the Pew Hispanic Center found that Latinos in general have favorable attitudes toward immigrants and immigration.

The survey found those feelings are strongest among middle-class and middle-age U.S.-born Latinos.

Michelle Malkin has pictures from the protests that you will not see on the nightly news! 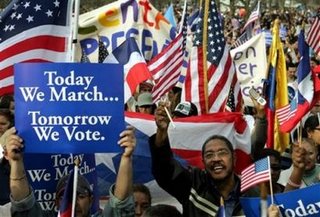 Demonstrators wave flags and display signs during an immigration-rights rally in Boston, Monday, April 10, 2006. Hundreds of thousands of people, demanding U.S. citizenship for illegal immigrants, took to the streets in dozens of cities Monday, in some of the most widespread demonstrations since the mass protests began around the country two weeks ago. (AP Photo/Steven Senne)

He who is known as Sefton shares his thoughts on the protests.