The Dalai Lama joins Muslims in San Francisco where the group is hoping to form an “United Nations of Religion”,
VIDEO HERE

The Dalai Lama noticed Muslims appear militant to some people.
That’s odd. Why would he say that? 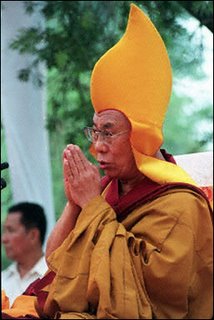 The Dalai Lama, seen here, has arrived in San Francisco to join Muslim leaders from around the world in an unprecedented summit on quelling violent religious extremism(AFP/Raveendran

The Dalai Lama says that Islam has been unfairly maligned and it is a compassionate faith:

The Dalai Lama urged religious leaders Saturday to reach out to Muslims, saying Islam is a compassionate faith that has been unfairly maligned because of a few extremists.

“Nowadays to some people the Muslim tradition appears more militant,” the 70-year-old exiled monk said at the weekend “Gathering of Hearts” conference, which aimed to bring Muslims and Buddhists together.

“I feel that’s totally wrong. Muslims, like any other traditions — same message, same practice. That is a practice of compassion,” he said.

That’s great! You are all wrong to believe that Muslims are militant. Never mind that there were Islamic attacks and death in Iraq, Afghanistan, Egypt, Gaza,… just today. It means nothing. You are just an Islamaphobe.