Colorado Senators pass legislation that says that any school that bans the US flag will not receive State grants!

The measure was prompted by recent school bans on flag displays following tension surrounding the debate over illegal immigration. It was passed by a vote of 28-3, with four Democrats choosing not to cast votes, and will now go to the House.

Debate earlier in the day was shut down after an angry exchange over patriotism and, after senators reconvened in the afternoon, Senate President Joan Fitz-Gerald warned that she would bring down the gavel on anyone who made a personal attack on another senator.

Now that’s what I’m talking about!

Here the principal of Skyline High School explains his decision to ban the US flag,
VIDEO HERE 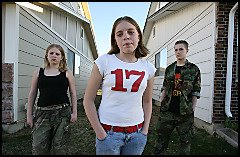 An 8th Grader says she is upset that she can’t support our troops,
CBS VIDEO HERE

A principal in Colorado is banning fatigues because students were wearing them to show support for our troops in Iraq. The clothes had become too much of an issue at the school(?):

“An increasingly large number of students were showing their feelings on immigration by the clothes they wore, and that had turned into ugliness, racial slurs and hurt feelings,” Myla Shepherd, principal of Shaw Heights Middle School, said Tuesday.

Some 25 students came to class last week in “anything camouflage they could find in their closets,” to show support for U.S. troops in Iraq, she said. Meanwhile, some of the Hispanic students brought bandanas designed like the Mexican flag and had them hanging from their pockets.

Shepherd sent a letter home Friday, telling parents the clothes and flags were being banned for a while. A few parents gathered at the school to protest the ban but most students abided by the new rules Monday and Tuesday, she said.

Shepherd said the school, which is 46 percent Anglo and 41 percent Hispanic, has had very little racial tension until the past couple of weeks. Eight times a year, there are programs that celebrate the diversity of the student body.

The school’s harmony has been disrupted by the fight in Congress and the huge rallies in Denver and other cities against the strictest of the anti-immigration bills, she said.

Daniel Wenger, whose stepdaughter attends Shaw Heights, wants Shepherd out, saying “kids have the constitutional right to wear whatever they want to school.”

Slapstick has a more on this latest ban on patriotism in Colorado.

Here is one rare instance where John Stephenson agrees with the ACLU.

The Colorado Senate voted Wednesday to punish schools that ban respectful displays of the U.S. flag after a caustic partisan exchange among lawmakers shut down debate amid accusations of anti-Americanism.

Slapstick has the details.