An eyewitness tells about the explosions in Dahab,
FOX VIDEO HERE

This is a big holiday week for Egypt and so hundreds of Egyptians along with Europeans flocked to the Red Sea resorts. Tourism is the second largest industry in Egypt behind the revenue from the Suez Canal.

President Bush denounced the terrorist attacks in Dahab today during a speaking engagement in Las Vegas. 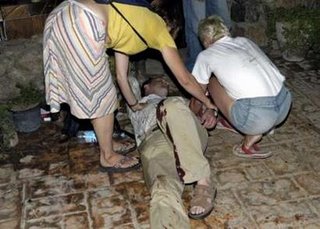 An injured foreign tourist is attended to after explosions shook the Egyptian Red Sea resort of Dahab April 24, 2006. (Reuters) 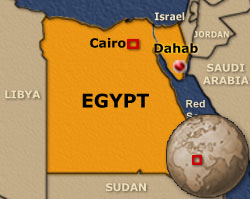 At least 17 dead at one of the resorts hit by terrorist blasts!
Update: 30 dead 150 wounded.

According to some reports, up to 100 people may have been killed or injured in the blasts.

Dr. Said Essa said he was headed to the scene of the blasts and that his casualty figures were for victims at the el-Khaleeg Hotel only. He said there were casualties from the other explosions but he had no details.

Al-Jazeera television said one of the blasts hit a restaurant, and authorities said more than 20 ambulances and police cars were rushing to the el-Masbat section of the city.

There have been a string of attacks in Egypt’s Sinai peninsula over 18 months. They included al-Qaida-style bombings in the Egyptian resorts of Taba and Ras Shitan in October 2004, killing 34 people, and in Sharm el-Sheik in July 2005, killing 63.

It is the height of the tourist season at the resort areas in Egypt. 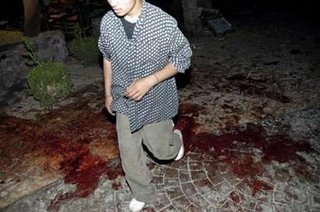 A man runs past a pool of blood after the explosions at the Egyptian Red Sea resort of Dahab April 24, 2006. (Reuters)

Yesterday was Easter for Coptic Christians and today is a National Holiday to welcome Spring. Big Pharoah is one of the thousands of Egyptians who headed to the Red Sea. Let’s hope he is alright. This sounds like it is very bad.

On July 22, 2005, their was a similar attack in Sharm el-Sheik resort town in Egypt.

Pajamas Media has a blogger roundup on the blasts in Dahab.

Wizbang, Michelle Malkin and Vital Perspective are blogging about the deadly blasts.

Israelly Cool is reporting that most of the tourists in the area are European and not Israeli. 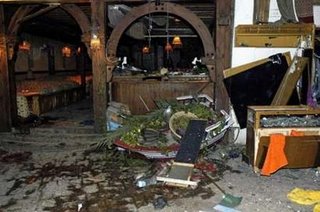 The wrecked fish stall of a restaurant is deserted after three explosions shook the Egyptian Red Sea resort of Dahab April 24, 2006. (Reuters)

Freedom for Egyptians is now reporting this news of the resort blasts.

(And, the judge’s protest ended violently in Cairo today. Freedom for Egyptians was covering that story closely as she is currently in Egypt.)

Update: Glad to hear that Big Pharoah is OK (via Instapundit)