The New Black Panther Party, will protest in Durham, North Carolina tomorrow and are demanding to talk with the Duke Lacrosse players.

And, it’s not because the Panthers are big lacrosse fans! 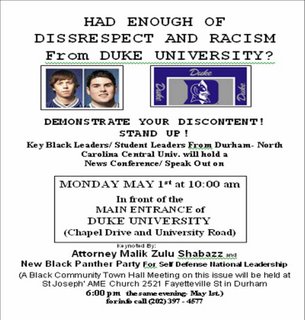 From the New Black Panther website.
Tell me,… Were they trying to say “diss-respect” as in “to diss someone” or were they going for the less exciting, yet traditional, “disrespect”?

The Conservative Voice is reporting about another protest planned for tomorrow:

By Sher Zieve – The Fox News Channel reported Saturday that the New Black Panthers will push for interviews with the Duke Lacrosse team players accused of raping a black exotic dancer. On Monday, the group plans a demonstration and march on Duke University. However, as of Friday, it is reported that the Black Panthers had not obtained a permit to do so.

The leader of the Panthers, Malik Zulu Shabazz, who has a long history of Jew bashing, will be participating in the march at Duke on Monday:

The national chairman of the New Black Panther Party for Self-Defense says his group intends to march at Duke University on Monday to “deal directly” with lacrosse players about charges of rape of an escort service dancer at a team party.

Duke’s campus police are coordinating with the Durham Police Department to prepare for the black-separatist group, which has a reputation for coming to its protests armed.

Malik Zulu Shabazz, a Washington lawyer who is the leader of the New Panthers, said he will be in Durham to rally with local black leaders and monitor progress of the criminal case against Collin Finnerty and Reade Seligmann, the two students charged with raping and kidnapping the dancer.

“We are conducting an independent investigation, and we intend to enter the campus and interview lacrosse players,” Shabazz said Thursday. “We seek to ensure an adequate, strong and vigorous prosecution.”

Shabazz says he cannot guarantee that the Panthers will not be packing arms tomorrow. Unreal!

Duke put out a statement in response to the planned protest by the New Black Panther group.

The Panthers say that they are going to Durham to protect the accuser.

Sweetness and Light has more on the story.
Riehl World View says this should be classified as terrorism.
Well, certainly, intimidation anyway!

Update: (8:00 PM CST) Malik Zula Shabazz says the community invited his group to come to Durham. He also says that there are ministers, professsors, and other community leaders that are going to attend the Black Panther rallies tomorrow in his FOX News interview. This is not going to be a good scene!