As Chinese President Hu Jintao works at making a good impression on the Americans in his historic trip to the United States, British surgeons today are accusing China of harvesting the organs of thousands of executed prisoners a year to sell for transplants.

The sickening rumors have been out there a while, but now the British Transplantation Society are claiming it is true! Good God! 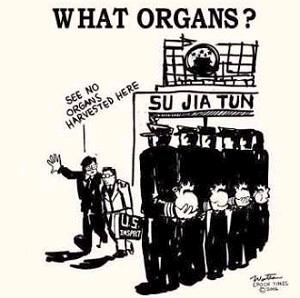 (Cartoon from the Epoch Times)

The BBC is reporting that there is something to the rumors of China selling off prisoners organs for profit:

The British Transplantation Society condemned the practice as unacceptable and a breach of human rights, in a statement released on Wednesday.

The British Transplantation Society says an accumulating weight of evidence suggests the organs of thousands of executed prisoners in China are being removed for transplants without consent.

Professor Stephen Wigmore, who chairs the society’s ethics committee, told the BBC that the speed of matching donors and patients, sometimes as little as a week, implied prisoners were being selected before execution. (Good God!)

Just last week a Chinese health official said publicly that organs from executed prisoners were sometimes used, but only with prior permission and in a very few cases.

But widespread allegations have persisted for several years – including from international human rights groups.

The emergence of transplant tourism has made the sale of health organs even more lucrative. 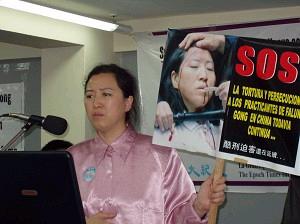 Ms. Wang Yuzhi, a Falun Gong practitioner, stated in Canada that she almost went blind as a result of the torture she received at Wanjia Labor Camp in Harbin, Heilongjiang Province. The police from the local “610 Office” took her to four different hospitals in Harbin to perform blood tests and to checkup on the condition of her internal organs. Her testimony caused quite a stir in the court.

After July when the government says it will tighten regulations, the price of organ transplants will also be rising!

Ah Li said during a gathering at the “Kidney Patients Association” last week, a doctor told the audience that one must act quickly because after July the costs will increase. Currently it costs about HK$100,000 yuan but after July, the costs will go up to around HS$450,000 yuan (approximately US$55,555). HK$200,000 yuan and HK$250,000 yuan are for fees incurred in Hong Kong and China respectively.

The Colorado State legislature passed a motion last week condemning the concentration camps in China known to harvest organs from live Falun Gong practitioners and others.

The Epoch Times has several articles and disturbing pictures of this practice.

China is currently in the running for a seat on the revamped UN Human Rights Council.

The Peking Duck says he would be surprised if it weren’t happening.
Democracy Project has news on the House human relations hearing this week on China.

Update: (Thursday, AM) Michelle Malkin has video of protests against Hu Jintao today at the White House.

Jim Hoft
Jim Hoft is the founder of The Gateway Pundit, one of the top conservative news outlets in America. Jim was awarded the Reed Irvine Accuracy in Media Award in 2013 and is the proud recipient of the Breitbart Award for Excellence in Online Journalism from the Americans for Prosperity Foundation in May 2016.
NY Attorney General Letitia James Threatens to Sue Trump Over Possible Military Deployment to Save Looted and Destroyed New York City
"I Honor Her. She is Such a Good Human Being" - Mayor De Blasio Responds to His Daughter's Arrest at Weekend Protests
Looters Murder Retired St. Louis Police Captain at City Pawnshop - Then Loot the Store (VIDEO)
Peaceful Protester Arrested in Chicago After Filming Himself Handing Out Bombs at MN Riots and Posting on Facebook (VIDEO)
Philly Gun Store Owner Blasts Would Be Thief with AR-15 During Attempted Looting - One Dead (VIDEO)
See more...