I thought I’d share a few shots from inside the new Busch Stadium in St. Louis from the Cardinal game with the Pittsburgh Pirates on Wednesday. 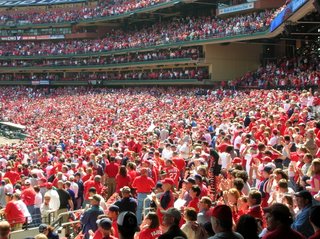 This game was at noon. Does anyone work in this town?

Albert Pujols gets walked to loud “BOOS” early in the game. 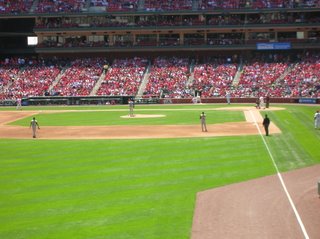 The news stadium has an open view of the St. Louis Gateway Arch. 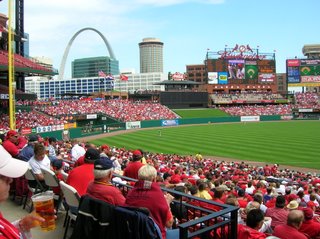 The Cardinals topped off the afternoon with a win in the bottom of the 9th inning. Here is how the St. Louis Post Dispatch described the final minutes:

But since this April remains property of first baseman Albert Pujols, all foul odors are temporary. Given a ninth-inning opportunity to right a listing game, Pujols delivered a third consecutive single behind David Eckstein and Hector Luna to give the Cardinals a 4-3 win over the Pirates and a sweep of their three-game series.

Just another Wednesday in St. Louis.