…Because, among other things, the US abuse against women in its international prison system — includes sexual abuse by male guards and shackling while pregnant and even in labor!

Is is no wonder that Hu Jintao from China and Iranian President Mahmoud Ahmadinejad laugh in our face.

There are days when I dream of putting this bunch on a row boat or 1950’s jalopy and pointing them towards Cuba. 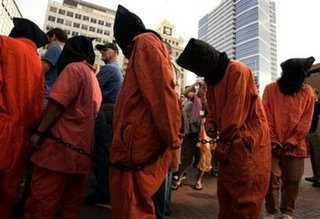 People in orange jumpsuits with bags over their heads walk through a crowd chained together during a rally Friday, April 28, 2006, in Portland, Ore., by members of the human rights group Amnesty International to call the U.S. government to account for allegations of torture ‘to ensure this never happens again.’ (AP Photo/Don Ryan)

This news was posted at the Anti-American Leftist site Raw Story, yesterday:

As the United States prepares a team of 30 to defend its record on torture before a U.N. committee, Amnesty International has made public a report blasting the United States for failing to take appropriate steps to eradicate use of torture at U.S. detention sites around the world, RAW STORY has learned.

U.S. compliance with the Convention against Torture and Other Cruel, Inhuman or Degrading Treatment or Punishment will be the topic of May 5 and 8 U.N. hearings in Geneva.

The United States last appeared before the Committee Against Torture in May, 2000. Amnesty claims that practices criticized by the Committee six years ago — such as the use of electro-shock weapons and excessively harsh conditions in “super-maximum” security prisons — have been used and exported by U.S. forces abroad.

The Amnesty report reviews several cases where U.S. detainees held in Afghanistan and Iraq have died as a result of torture. The group also lambasts U.S. use of electro-shock weapons, inhuman and degrading conditions of isolation in “super-max” security prisons and abuses against women in the prison system — including sexual abuse by male guards, shackling while pregnant and even in labor.

As of now, the U.S. has yet to prosecute a single official, military officer or private contractor for “torture” or “war crimes” related to its occupations of Iraq and Afghanistan, or the “war on terror.”

“The heaviest sentence imposed on anyone to date for a torture-related death while in U.S. custody is five months,” notes Curt Goering, Senior Deputy Executive Director for Amnesty International USA. “[That’s] the same sentence that you might receive in the U.S. for stealing a bicycle.”

The five month sentence resulted from the death of a 22-year-old taxi-driver, who had been hooded and chained to a ceiling, then kicked and beaten until dead.

“The U.S. government is not only failing to take steps to eradicate torture,” he adds, “it is actually creating a climate in which torture and other ill-treatment can flourish — including by trying to narrow the definition of torture.”

The report argues that these cases are not isolated incidents, but part of an overall pattern condoned by U.S. officials.

“While the government continues to try to claim that the abuse of detainees in U.S. custody was mainly due to a few ‘aberrant’ soldiers, there is clear evidence to the contrary,” said Javier Zuniga, Amnesty International’s Americas Program Director. “Most of the torture and ill-treatment stemmed directly from officially sanctioned procedures and policies — including interrogation techniques approved by Secretary of Defense Donald Rumsfeld.”

Amnesty’s findings have already been sent to members of the UN Committee Against Torture.

At its May 1-19 session, the Committee Against Torture will consider reports presented by Georgia, Guatemala, Republic of Korea, Qatar, Peru, Togo and the United States. With the exceptions of Korea and Peru, Amnesty has also provided reports about the actions of these nations.

So, is this a setup against the US and Bush?

On April 18, 2006, the UN demanded that the US offer up more information on its treatment of US terror prisoners and its foreign terrorism suspects. The UN learned much of this information atfter leaks from Democratic CIA figurehead Mary O. McCarthy to the WaPo’s Pulitzer scribe Dana Priest. The US has been preparing its case:

In questions submitted to Washington, the panel also sought information about secret detention facilities and specifically whether the United States assumed responsibility for alleged acts of torture in them, U.N. officials said on Tuesday.

“It is the longest list of issues I have ever seen,” Mercedes Morales, a U.N. human rights officer who serves as secretary to the U.N. Committee against Torture and Other Cruel, Inhuman or Degrading Treatment or Punishment, told reporters.

Washington is expected to send a delegation of 30 officials to defend its record at a meeting next month in Geneva of the committee, composed of 10 independent human rights experts.

It ought to be an exciting week in Geneva as the Corrupt League of Nations gives the US and President Bush a lecture on human rights as its own corrpt Human Rights Council welcomes a brand new bunch of violent anti-democratic regimes.

“I wonder how many of Dana’s hubby’s buddies will be there and helped in preparing “reports” and “testimony?”

Amnesty International is not alone. The ACLU has joined them.

As far as abuse goes… Despite the anti-US rhetoric published in our own press, it is interesting to note that several of the detainees do not want to leave Guantanamo.