After a bomb blast exploded at a Sunni prayer service in a Karachi park, angry mob members turned on security forces, pelted ambulances with stones, and torched cars. 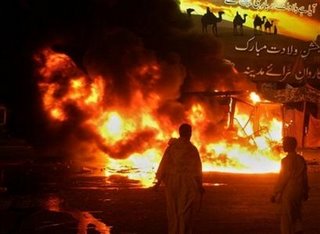 Pakistani men look at burning vehicle set on fire by angry protestors after a bomb explosion in Karachi, Pakistan Tuesday, April 11, 2006. A powerful bomb exploded during an Islamic prayer service in a park in this southern Pakistani city on Tuesday, killing at least 40 people, the interior minister said. Dozens more were wounded. (AP Photo/Shakil Adil)

No one has taken blame for the blasts at a Sunni prayer service in a Karachi park:

At least 45 people were killed and dozens more wounded in a bomb attack on a Sunni Muslim gathering in Pakistan’s port city of Karachi on Tuesday, officials said.

Hospital sources said 45 people were killed and dozens wounded in the blast at Karachi’s Mishtar Park during a prayer meeting attended by several thousand Sunni Muslims to celebrate the birth anniversary of Prophet Mohammad.

Television pictures showed dead bodies lying on the ground and wounded being taken to hospitals in vans after the explosion.

“What we know at this point is that there was a blast … and that there are some injured who are being taken to the hospitals,” Jehangir Mirza, police inspector general for Sindh province, told Reuters.

There were no immediate claims of responsibility, but sectarian violence between Sunni and minority Shi’ite Muslims has plagued Pakistan, and Karachi in particular, for the past two decades.

Hundreds of people have been killed in religious violence.

This same Sunni Muslim group suffered the loss of 29 women and children in a stampede earlier in the week. 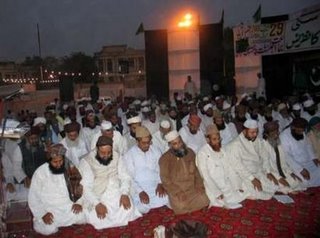 Sunni Muslim worshippers offer prayers minutes before a blast during a religious gathering in Karachi, Pakistan April 11, 2006. At least 40 people were killed in a blast at a city park in Pakistan’s prot city of Karachi on Tuesday where Sunni Muslim worshippers had gathered to celebrate the birth anniversary of Prophet Mohammad, Pakistan’s interior minister said. (REUTERS/Athar Hussain)

The chief organizer of the prayer service was among those killed in the explosion:

The blast occurred at about 7 p.m. at Nishtar Park in the center of the city, where thousands of people had gathered to mark the birth of the Prophet Muhammad, Karachi police official Muhammad Mushtaq said by telephone.

Police are trying to determine whether it was a suicide attack or whether the bomb was planted at the scene, Sherpao said. A loud explosion was heard during evening prayers, Mushtaq said.

Pakistan, a Muslim nation of 160 million people, has had several attacks in recent years, many of them in Karachi. President Pervez Musharraf blames the violence on opponents of his support for the U.S.-led campaign against terrorism. Some of the attacks are attributed to rivalries between the Shiite Muslim minority and the Sunni Muslim majority.

Hanif Billo, the chief of Tehrik Ahl-Sunnat, the Sunni Muslim group that organized the gathering, was among at least 44 people who died in the attack.

The death toll is now at 55 after the park blast.