A recent court decision has prompted the BBC to issue a “Kiss Alert” to tourists traveling to Malaysia!

After the arrest of a Chinese couple for hugging and kissing in public, protesters took to the streets in Malaysia to rally against strict moral codes. 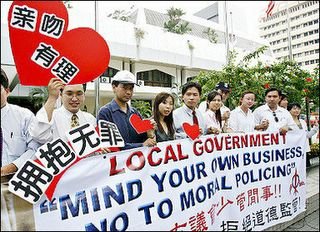 Supporters of a Malaysian opposition party gather outside Kuala Lumpur’s City Hall April 13, 2006. The demonstrators on Thursday gathered in protest against a recent court ruling allowing the city authorities to charge a Malaysian Chinese couple with indecent behaviour after they were caught kissing and hugging in a public park. The court ruling has sparked a heated debate in multi-racial Malaysia on the issue of morality and law. The Chinese placards ‘you have your right to kiss’ and ‘no guilt in hugging’. (REUTERS/Bazuki Muhammad)

Protesters marched to the Kuala Lampur City Hall to rally against morality laws that they say move Malaysia a step closer to Islamization:

The protest was in support of an ethnic Chinese couple, Ooi Kean Thong and Siow Ai Wei, expected to face indecency charges in court in June for allegedly hugging and kissing in public.

City officials claim they caught Ooi, 24, and Siow, 22, in the act at a park near the landmark Petronas Twin Towers in 2003. Such acts are deemed indecent under a Kuala Lumpur bylaw, and their lawyer has said the couple could be jailed for up to a year if convicted.

“If we don’t voice our protest, the process of Islamization of Malaysia will take a big leap,” Chong told reporters.

About a quarter of Malaysia’s 26 million people are ethnic Chinese, while Malay Muslims form about 60 per cent of the population. Under Islamic law, unmarried people of the opposite sex are forbidden to show affection in public and may not remain together in a room without a chaperone.

This brave public display of affection could put the two Malasians in jail for a year. 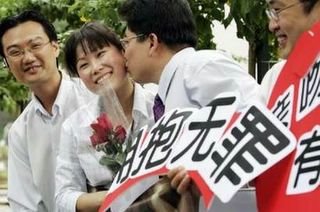 The two Chinese say they were slapped with the arrest after they refused to pay bribes to the police:

The Democratic Action Party’s youth wing held hands and waved heart-shaped placards that read “You have the right to kiss” and “Not guilty of hugging” and a banner reading “No to moral policing”.

Ooi Kean Thong, 24, and Siow Ai Wei, 22, claim they were slapped with a summons when they refused to pay bribes to two city hall officials, who have denied the claims.

Dhimmi Watch has more on this Sharia watch in Malaysia.

The P.D.A. verdict prompted the BBC to issue a Kiss Warning to tourists traveling to Malaysia.

Here are thoughts on why Malaysia matters in bringing hope of moderation to Islam.

Jim Hoft
Jim Hoft is the founder and editor of The Gateway Pundit, one of the top conservative news outlets in America. Jim was awarded the Reed Irvine Accuracy in Media Award in 2013 and is the proud recipient of the Breitbart Award for Excellence in Online Journalism from the Americans for Prosperity Foundation in May 2016.
Facebook Permanently Bans Vet-Owned Apparel "American AF" Over Awesome Trump Merchandise
"And Now He's Dead!" -- SICK: Governor Cuomo Jokes About Young Man Who Died from Coronavirus - Then Repeats It (VIDEO)
"Get the F**k Out! Get the F**k Out!" -- Black Lives Matter Screams at Jews Who Joined Their Philly Protest (VIDEO)
"Who the Hell Elected You and Put You in Charge of What the Media Is Allowed to Report?!" - WOW! Sen. Ted Cruz RIPS Jack Dorsey for Censorship of NY Post's Biden Reports (VIDEO)
Police Arrest Crazed Man After Destroying Altar at St. Martin of Tours Catholic Church in Louisville (VIDEO)
See more...