Transgendered Republican Sets Her Sights on US House of Reps

Midge Potts is not your typical Republican…

Midge Potts has been arrested with Cindy Sheehan at the White House and is a member of the DC Anti-War Network (DAWN).

“Mitch” Potts joined the Navy in 1990 and served in the first Iraq War. About four years ago “Midge” began living the life as a woman. She is running against Roy Blunt in the Missouri Republican Primary for US representative:

Potts, the state’s first openly transgender candidate, is one of the Republican challengers to incumbent Roy Blunt in Missouri’s 7th Congressional District race.

“Part of my reason for running is, not so much to make transgender or gay issues the centerpiece of my campaign, but to show that we are all Americans and that anybody can run for any office,” Potts said. “America was built out of diversity, and people need to stop being afraid and feel like we have to limit ourselves based on our gender or color or gender preference.”

Although Potts considers herself an independent, she says she is running as a Republican because she believes in the party’s traditional platform of financial conservatism, states’ rights and a strong national defense. She is pushing for term limits, debt reduction and building up the National Guard.

She also wants an end to U.S. involvement in Iraq.

Midge was arrested with Cindy Sheehan outside of the White House on September 26, 2005. 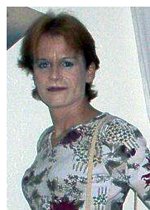 Midge was arrested with two other anti-war demonstrators for protesting last year on the steps of the Supreme Court. During sentencing the courtroom broke out into cheers several times as the defendant’s heartfelt statements were greeted with applause from the anti-war gallery:

In their sentencing statements, each of the defendants spoke from their hearts. Dave delivered his speech first, and in it he boldly said that he “regretted nothing”; supporters who were in attendance in the court room burst into applause as Dave finished his remarks.

Next, Midge explained to Judge Wynn how she no longer believed in the Americas so-called democracy, proclaiming, “When I was a child, I was taught to believe that the freedoms guaranteed to us in the First Amendment of the U.S. Constitution were the foundation our democratic principles. But your honor, that belief in the Bill of Right has died here today.

Patrick Henry said “Give me Liberty, or give me Death.” So, as far as I am concerned, you might as well give me the death penalty in punishment of the horrible crime I committed.” Once again, the courtroom exploded with applause, and the judge did nothing to quiet the room except to wait patiently for people to finish clapping.

My, that would have been a good show. Midge has also protested with Cindy Sheehan in the last year. 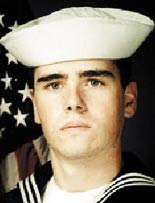 Midge Potts, then known as Mitchell, served in the Navy and the Persian Gulf War. She was discharged in 1993. (St. Louis Post Dispatch)

Another candidate who filed to run against Roy Blunt as a democrat was White Supremist Glenn Miller Jr. The big tent party refused him:

Glenn Miller Jr., who once was the subject of a nationwide manhunt, initially tried to seek the Democratic nomination to challenge Republican Roy Blunt for his 7th Congressional District seat. Blunt has until March 28 to file for re-election.

Miller, an Army veteran and retired truck driver, filed Monday with the secretary of state’s office. His $100 filing fee was forwarded to the Missouri Democrat Party, which rejected the money, meaning he no longer qualified to run on the Democratic ticket.

“We don’t believe he’s a Democrat,” Jack Cardetti, spokesman for the state party, said Thursday night. “The Democratic Party is the big-tent party, but that does not include white supremacists.”