“We have known for many years that Saddam Hussein is seeking and developing weapons of mass destruction… Saddam may well hide his most lethal weapons in mosques, schools and hospitals. If our forces attempt to strike such targets, untold numbers of Iraqi civilians could be killed.”

And, so… After the “paralysed” UN body failed to hold Iraq accountable, America and it’s 30 nation Allied Coalition took action on March 19, 2003.

But, the war has not been without its critics from the Left…

* German politicians predicted: “Millions of people in Baghdad will be victims of bombs and rockets.”
What happened: The antiwar Iraqi Body Count site lists an estimated 4,000-6,000 civilians and fighters were lost in the startup months of the War in Iraq.

* Ted Kennedy predicted:“A war on Saddam might also cause an unprecedented humanitarian crisis with an estimated 900,000 refugees, a pandemic and an environmental disaster as Saddam lit the oilfields on fire.”
Actual Result: The oil fields were not set ablaze, no pandemic.

* The UN predicted… It is also likely that in the early stages there will be a large segment of the population requiring treatment for traumatic injuries, either directly conflict-induced or from the resulting devastation. Given the population outlined earlier, as many as 500,000 could require treatment to a greater or lesser degree as a result of direct or indirect injuries.
What happened: Again, the antiwar Iraqi Body Count site lists an estimated 4,000-6,000 civilians and fighters lost in the startup months of the War in Iraq.

* Ted Kennedy also predicted: “The U.S. could run through “battalions a day at a time” and that the fighting would look like “the last fifteen minutes of ‘Private Ryan.'” 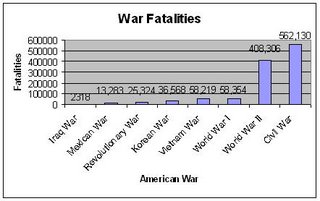 Actual Results: Although each fatality is a tragic loss for America, this is still one of most successful military campaigns the US has ever fought.

* Medact Global Health: “A more contained conflict could cause half a million deaths and have a devastating impact on the lives, health and environment of the combatants, Iraqi civilians, and people in neighbouring countries and beyond.”
Actual Results: Antiwar Iraqi Body Count says that 35-37 thousand deaths including bank robbers.

* Hans Blix argued: The Iraqis were better off before the war 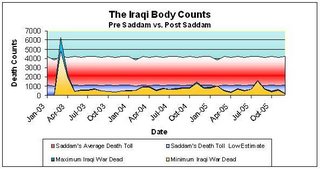 The harsh truth: Before the War in Iraq, Saddam was filling his mass graves and keeping state hired rapists on his payroll. In those 20 years about 5% of the people of Iraq were killed or mysteriously disappeared. The red area in the graph above shows the estimated average deaths in Iraq under Saddam Hussein from 36 average deaths per day from mass grave discoveries, to 137 deaths per day from a different source. The yellow area shows estimated total fatalities since the beginning of the War in Iraq from Iraq Body Count, an antiwar website.

* John Kerry insisted… “There are no-go zones in Iraq today (September 2004). You can’t hold an election in a no-go zone.”
Results: Iraq held a very successful democratic election in January 2005.

* Jimmy Carter predicted… “The Carter Center did, our 52nd election. All of our elections have been in troubled countries where the outcome was doubtful. But in every case there has to be a central government that can set up the constitution and bylaws and rules so that an election can be held peacefully. I don’t see that happening as long as the terrible violence continues in Iraq.”
About those election results: Former President Jimmy Carter, who predicted that elections in Iraq would fail and in the past year described the Bush administration’s policy there as a quagmire, this week ended 10 days of silence to declare the historic Iraqi vote “a very successful effort.” (February 11, 2005)

* Madeleine Albright observed… “It has long been obvious that the Bush administration lacks a viable plan for success in Iraq. The hardest political job — drafting a constitution acceptable to all factions — has not even begun…”
Results: Iraqi Constitution drafted and accepted by 78% of the voters.

* John Murtha exaggerated… “Many say that the Army is broken. (Murtha did later, actually!) Some of our troops are on their third deployment. Recruitment is down, even as our military has lowered its standards.”
Reality: The Army Guard is surpassing its goals and growing in strength despite Rep. Murtha’s campaign against military recruitment.

And now they say this is a Civil War…
We will see.

Donald Rumsfeld today in the Washington Post had this to say on what we’ve gained from our three years in Iraq:

Consider that in three years Iraq has gone from enduring a brutal dictatorship to electing a provisional government to ratifying a new constitution written by Iraqis to electing a permanent government last December. In each of these elections, the number of voters participating has increased significantly — from 8.5 million in the January 2005 election to nearly 12 million in the December election — in defiance of terrorists’ threats and attacks.

Ken McCracken at WILLisms asks, “Is the U.S. on the right trajectory for success in Iraq, or not?” and has a few interesting responses (including mine!)

Democracy Project explains that democrats may finally have a Defense plan.

Glenn Reynolds has a huge roundup on the missed predictions from the Leftists.

Also, Little Green Footballs has shocking statistics that show the low casualty rates of military men and women in this War on Terror.