The US Forces in Iraq just finished the month with the lowest total fatalities, despite the Civil War declared by democrats, since February of 2004, and the second best month since the War in Iraq began three years ago.

This is an amazing wartime achievement for the men and women of our military serving in Iraq!

It also continues an encouraging trend for our forces serving in Iraq. 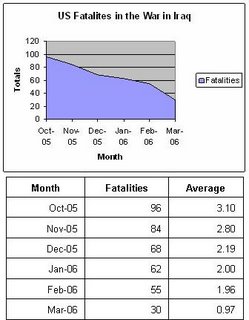 (This is strange. The todatl from the Iraq Coalition Casualty Count site has actually dropped to 29 for March in the last 10 hours)

This news reminded me of one of the defeatist comments from a gloom and doomer who stopped by this week:

Hey, Kids! ONLY _FOUR_ dead this week! We’re getting BETTER, aren’t we!

Nevermind that the major combat operations ended, according to one of Bush’s innumerable miscalculations, just under three years ago. Nevermind that last year the Iraqi insurgency was, acccording to Dick (head) “Dead-Eye” Cheney, in its “death-throes”…

…Tell us, won’t you, what number of deaths _do you consider_ as really very bad and even unacceptable?

Cause all you have to do is wait a while; those deaths are coming up, thanks to your incredible and stubborn stupidity.

To answer the first question: Saddam was murdering between 36 Iraqi civilians per day to 137 Iraqis per day. This was very bad! This week FOX News reported that deaths in Baghdad are averaging 30 per day. Certainly, this is very sad news, but it is not the slaughter that Iraqis were used to seeing under Saddam Hussein.

It’s too bad that the Democrats can’t see this. And, it’s too bad the liberals didn’t put something in their “Bold Security Agenda” about appreciating the great work our men and women are doing in Iraq today. In fact I would be glad to donate $20 to the next national democratic politician who mentions that Iraq is not the slaughter house it was under Saddam. (I don’t think I need to go run to get my checkbook anytime too soon!)

Now, to answer the second question: Will the War in Iraq end before we reach the 58,000 mark?

It would not be until the year 2160 that the US would reach the same fatality level as Vietnam!*
(2078- worse case scenario!)
(God willing this positive news will continue.)

So, it’s a pretty safe bet to say the War in Iraq will end before we reach the 58,000 mark…
Iraq ain’t no Vietnam!

-Update-
More perspective on how the War in Iraq stacks up compared to other US Wars: 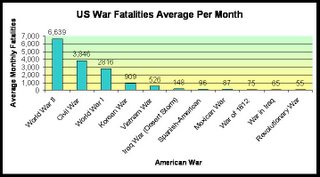 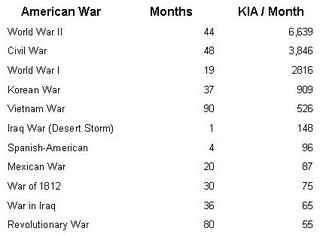 It looks like our men and women are doing quite well!

** From the comments below there is a link to “Lies.com” where Leftists explain that because we lost 29 US soldiers this month in Iraq, we therefore can expect to lose 2,500 per month in a short time. (I wish the same principle would apply to my income!)

Sadly, this is more defeatist language from the Left. Growth rates like that may apply to microbes or pyramid schemes but there are too many factors involved that contradict the data, like elections and military training, to project those high numbers on the War in Iraq.

Wilsonizer does quick work to point out that the Democratic “Real Security” plan has at least one point that is not feasible.

The Real Ugly American has much more on reporting from Iraq.