The Saddam and Osama Dancing Dolls Both Come Packing

The dancing Osama Bin Laden doll is making a comeback in Kabul. The doll comes complete with its own grenade and AK47. 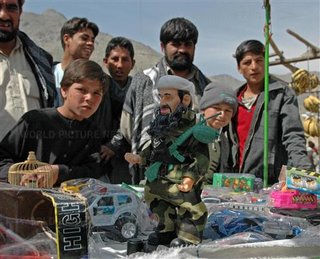 Among other toys, the dancing doll of Bin Laden is being sold to children at the Badam Bagh (Almond Garden), suburb of Kabul, Afghanistan, Friday, March 24, 2006. The Bin Laden doll is made in Pakistan. (WPN)

The Dancing Saddam Doll comes loaded with hand grenades, daggers, a walkie-talkie, binoculars and an AK-47… Oh, and pirate’s hat! 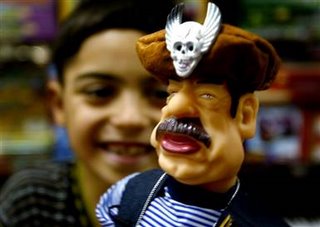 An Iraqi boy smiles as he looks at a display of dancing Saddam Hussein dolls in a Baghdad toyshop. (Reuters, July 2004).

Meanwhile, in Baghdad, the Dancing Saddam dolls were hot sellers soon after the fall of the Saddam Hussein regime:

Toy stores around Baghdad are doing a quick trade in the foot-high, battery-powered dolls of the former president, which swing their hips to cheesy pop music at the flick of a switch.

The Saddam doll is decked out with hand grenades, daggers, a walkie-talkie, binoculars and an AK-47 and boogies to the “Hippy Hippy Shake”

It’s funny, isn’t it?” Mustapha al-Kadamy, a young father, said Wednesday as he browsed through a toy store in the wealthy Mansoor district and prepared to buy one of the dancing Saddams.

The owner of the store started offering the dolls shortly after Saddam’s regime was overthrown in April of 2003.

In 2003 Israel intercepted a load of dancing Osama and Saddam dolls claiming the dolls had the potential to incite violence. The cargo also included 450 Teletubby dolls.