It’s not just for Democrats anymore! 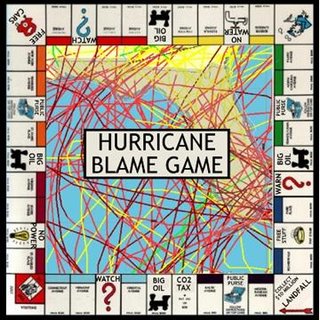 The Florida Edition of the ‘Hurricane Blame Game’ is one of today’s most popular board games, especially with trial lawyers in the Gulf Coast states. (ecoEnquiror)

Andrea S. sends this report from the ecoEnquiror about a new board game that is hitting the coast. Each player represents a Trial Lawyer! Hah!

(West Palm Beach, Florida) Just as the stock market crash of 1929 and the resulting economic depression led to the invention of the wildly popular game ‘Monopoly’, a new game based upon the 2005 hurricane season is the current favorite among best-selling board games.

Different state editions of the ‘Hurricane Blame Game’ for each of the hurricane-prone states are offered, such as the Florida Edition(shown above). The players represent trial lawyers who compete to see whose law firm can collect the greatest wealth from filing lawsuits against ‘Big Oil’ companies, or against individual states that failed to respond to hurricane strikes.

The game is a mixture of chance and skill. Hurricane tracks are shown on the board that represent all hurricanes that hit the state between the years 1851 and 2003. A card drawn from the “Chance” pile determines which hurricane has just hit the state. A roll of the dice moves the player around the board, and any privately held properties that are landed on are fair game for lawsuits, as are any states.

The players do not have to prove that global warming caused individual hurricanes to be able to win lawsuits against the oil companies. “Just like in the real world, public displeasure with oil company profits after the 2005 hurricane season is expected to lead to successful lawsuits and large monetary awards, just like in our game”, explained Mr. Tarrow. “Every player ends up being a winner.”

This story reminded me of “Oprah’s Racist Hurricane Blame Game” this week on her show. Here is a snippet:

When Hurricane Katrina blew across the Gulf Coast, it also blew the lid off America’s dirty little secret. For years, the poor people in the United States have been virtually invisible(?). But now there is no denying the truth—37 million Americans live in poverty. Oprah drove 70 miles from her home in Chicago to the township of Pembroke, Illinois, to see the reality firsthand.

In the township of Pembroke, Illinois, the state’s most impoverished community, 55 percent of the residents live beneath the poverty level and 40 percent live without running water. The average income is $9,700 a year.

With no opportunity for jobs in the near future, Pembroke has no bank, no drug store, no real medical facility and very few paved roads. The mayor, the Reverend Jon Dyson, says every day is a struggle for survival.

It’s too bad that she didn’t mention that there are less poor in the US now than when The Clinton’s shared office.

It’s also too bad that she never confronted Mayor Ray Nagin for his inaccurate analysis of the situation in New Orleans after Oprah visited with him back in August. Oprah sure was shocked to hear Anderson Cooper tell her that the mayor turned down an invitation from Amtrak to evacuate people from New Orleans before Katrina hit.