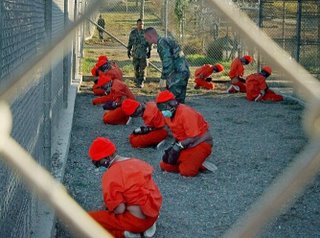 Just what kind of torture and brainwashing is going on here, anyway?… Don’t they understand that the gourmet menus, indoor plumbing and electricity are really just masks for this atrocious American gulag?

Some Guantanamo detainees don’t want to leave!
Via Barcepundit

Fearing militants or even their own governments, some prisoners at Guantanamo Bay from China, Saudi Arabia and other nations do not want to go home, according to transcripts of hearings at the U.S. prison in Cuba.

Uzbekistan, Yemen, Algeria and Syria are also among the countries to which detainees do not want to return. The inmates have told military tribunals that they or their families could be tortured or killed if they are sent back.

President Bush has said the United States transfers detainees to other countries only when it receives assurances that they will not be tortured. Critics say such assurances are useless. The U.S. has released or transferred 267 prisoners and has announced plans to do the same with at least 123 more in the future.

A man from Syria who was detained along with his father pleaded with the tribunal for help getting them political asylum in any country that will take them.

“You’ve been saying ‘terrorists, terrorists.’ If we return, whether we did something or not, there’s no such things as human rights. We will be killed immediately,” he said. “You know this very well.”

The US is looking for anyone out there willing to take in some ex-terrorists:

A military tribunal has determined that five are “no longer enemy combatants” and can be released from Guantanamo Bay. The U.S. agrees they could face persecution back in China but so far has not found a third country to take them.

Hmm, pity! Maybe this bunch would take them in?

Barcepundit also has surprising news from Belgium officials regarding the conditions at Gitmo. 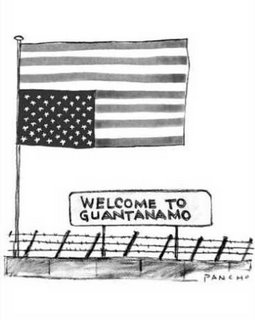 Of the 505 detainees, 100 or more are from Saudi Arabia, about 80 from Yemen, about 65 from Pakistan, about 50 from Afghanistan, and two from Syria. So statistically this could be a large segment of the detainees who are concerned about their transfers.

Guantanamo is notorious for being the first “gulag” (see Senator Dick Durbin) in history where the average weight gain of prisoners is 13 pounds.