A famous caricature, the Crazy Cartoonist, has lost his head in Denmark…

Mr. Ivar Gjørup, a famous Danish cartoonist, has produced his own Muhammad cartoon to go with the famous 12 (and not so famous three) from the Jyllands-Posten. 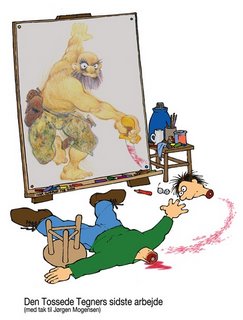 As seen at “hmmh”, Ivar’s cartoon did not make the Jyllands Posten cut… so to speak.

Danish Muhammad Cartoons has more on this story:

The crazy cartoonist was a silent Danish comic strip from the 50’ies. The main character was a penciller, who could draw objects and make them become real.

Cartoonist Ivar Gjørup (alias Olfax) has made a grim tribute to the old master – and he writes (my translation),

“I’m siding with the twelve good Danish cartoonists, who are now – along with the rest of us – forcibly committed to a power game, which we have had nothing to do with, home and abroad. And I’m siding with the offended believers, whose feelings are being exploited in the same power game, greatly endangering the inhabitants of the Earth – from all faiths.”

Ivar Gjørup is the creator of the comic strip Egoland, which is in my opinion the world’s best strip, but – alas – untranslatable. Gjørup also writes (Danish text, my translation),

“In these crazy times, our worst fear has become reality. We have created our own bogeyman-image, and it’s the bogeyman-image that’s killing us.”

Sugiero says there seems to be a history, 300 years or so, of Irreverent Images.