Silly Cindy is arrested, this time in front of the UN.
Hat Tip Michelle Malkin 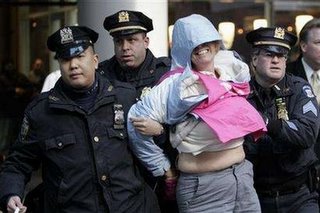 Gina Cobb has more on the arrest.

Cindy Sheehan’s next Anti-War/Anti-US gig is this upcoming weekend as she marches from a church in Landstuhl, Germany (a town where wounded American soldiers are treated) to a location outside Ramstein Airbase where she plans to set up another “Camp Casey.”

Davids Medienkritik in Germany is planning a counter-protest:

But not everyone is planning to sit around and silently watch the German media fawn and drool over Ms. Sheehan. Several groups are organizing a peaceful counter demonstration to support American and Coalition soldiers and victory in Iraq. We strongly encourage all of our readers in Germany and surrounding areas to converge on Ramstein this Saturday to take part! Our website has already christened the demonstration site “Camp David.” We will be contacting other bloggers throughout Germany and Europe to spread the word.

Davids is asking for support for the Camp David event. So if you know of anyone in the area or can spare some camping equipment(?), please let him know.

More information on the counter-protest is at Davids Medienkritik.

Update: NeanderNews adds this on Cindy:

Richard Grenell, the spokesman for the U.S. Mission, said in response to Sheehan’s arrest: “We invited her in to discuss her concerns with a U.S. Mission employee. She chose not to come in but to lay down in front of the building and block the entrance. It was clearly designed to be a media stunt, not aimed at rational discussion.”