Randall McCloy Jr. spoke to reporters today about his ordeal in the Sago mines,
VIDEO HERE

McCloy was trapped in the mine for 41 hours before his rescue!
He was the lone survivor in the tragedy at the Sago Mine. 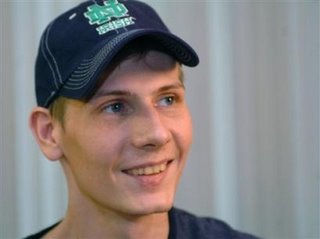 Randal McCloy Jr. smiles during an interview during his last full day at the Mountainview Regional Rehabilitation Hospital in Morgantown, W.Va., Wednesday, March 29, 2006. McCloy heads to his Simpson, W.Va. home Thursday to continue his recovery from the Sago Mine disaster of Jan. 2, 2006, which killed 12 other coal miners. (AP Photo/Dale Sparks)

The miracle from the Sago Mine disaster, Randal McCloy Jr, went home this week:

The sole survivor of the Sago Mine disaster would prefer to forget the few fragmented images he can recall from the 41 hours he lay trapped deep underground in a mine filled with toxic fumes.

And when Randal McCloy Jr. thinks of the 12 friends and co-workers who slowly succumbed to carbon monoxide poisoning after the Jan. 2 explosion at the mine, he pictures them elsewhere.

“I try to leave out all the gory details and stuff like that because I don’t like to look at them in that light and that way,” he told The Associated Press on Wednesday, a day before he was scheduled to be released from a rehabilitation hospital.

“I just like to picture them saved and in heaven, stuff like that,” he said in one of his first interviews. “That’s really the best way you can remember somebody.”

Doctors say McCloy, 26, was perhaps minutes from death when he was pulled from the mine Jan. 4 with kidney, lung, liver and heart damage. He was in a coma for weeks, suffering from severe brain injuries.

On the eve of his departure, he sat on a hospital bed with his wife, Anna, choosing his words carefully.

From the video he looks and sounds amazingly well. What a miracle!