(The entire briefing was 33 minutes, the parts mentioned are about halfway.)

** Here’s what the liberal media told you about today’s press briefing:

Rumsfeld says trainers may be in Iraq in 2009

Rumsfeld says he’s not stepping down
Boy, I was wondering about that! 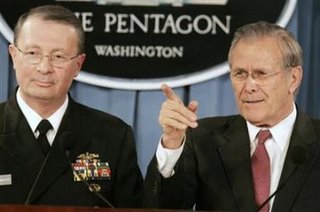 ** And, here’s what the liberal media did not tell you about today’s press briefing…

Wonkette gives Rummy two thumbs up for this exchange from the briefing:

Reporter: “Do you feel embattled at this point in your tenure? In a recent column, Maureen Dowd quoted an unidentified administration official who described you as an “eccentric old uncle who’s ignored.” She claims that you don’t hold the same sway in meetings.”

Rumsfeld: “Did you get all that? You want to be on camera, right? ThatÂs a sure way to get on the evening news. The answer to your question is no.”

Reporter: “Well, I’m asking about the facts reported in the column. Do you feel you hold the same sway in meetings?”

(Pause)- Rumsfeld looks away for a moment, then…

Rumsfeld: “If you believe everything you read in Maureen Dowd, you better get a life.”

(What a tactless disrespectful attacking question!)

And, then there was Rumsfeld to Barbara Starr, CNN Pentagon reporter:

“I’m rather old fashioned, I like to engage my brain before
my mouth.“

Update: (Friday) Matthew D. wrote in with another great line from the press conference:

At the very end they are talking about a Lessons Learned analysis, a reporter asks about any “glaring miscalculations” made by US forces. Rumsfeld says:

“It’s fascinating you have no interest as to whether they made any glaring miscalculations. Isn’t that an interesting phenomenon?”