Earlier today I put up this post with pictures of anti-Bush protests in India:

The picture below was included in the post on the protests.

As if the English on the sign was not threatening enough, Isaac Schrodinger thinks it odd that the Urdu writing above the text does not carry the same message. 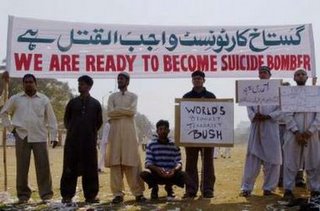 Isaac Schrodinger writes in that:

An image from this post at Gateway Pundit caught my eye. It’s a photo in which Indian Muslims have a big sign behind them which reads, “WE ARE READY TO BECOME SUICIDE BOMBER”. It’s curious that the Urdu writing above that text doesn’t say the same thing.

Isaac has the threatening translation of the Urdu message.

A Great Catch by Isaac!

There was news that came out earlier today that 3 Indian protesters were killed in Lucknow city in an anti-Bush protest.

It wasn’t until later today that we found out this:

Police used teargas and truncheons to break up violent clashes between Hindus and Muslims in Lucknow, the capital of Uttar Pradesh state, police told AFP.

“Two of those killed are Hindus and one is a Muslim,” said local government official Ghulam Abbas.

Two of the victims were shot dead, one of them a 15-year-old girl, while the a third man died in hospital after sustaining a gunshot wound, Abbas said…

…”Muslims after offering prayers went around ordering shops to down their shutters to protest President Bush’s visit to India which sparked off the clashes because the Hindus objected,” Pandey said.

Radical Muslims went around and ordered Hindus to close their shops in protest to Bush’s visit. When they would not… rioting and death followed.