“It is certainly not in keeping with my understanding of the Scriptures, because this bill would literally criminalize the Good Samaritan and probably even Jesus himself.”

Democrats blast House bill HR 4437,
but they are the ones who voted to keep the felony language in the bill! 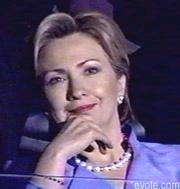 Hillary Clinton and the Democrats are blasting Republicans for the House Immigration Bill even though it was the Democrats in the House who refused to take off the “felony” language that Hillary calls Un-Christian!

From the San Francisco Chronicle:

A bill passed by the House would make it a felony for illegal immigrants to stay in the United States. Jeff Lungren of the House Judiciary Committee explained that, while it is a crime to cross the border illegally, staying here after sneaking in or after your visa expires has been only a civil offense. The House wanted to make it an actual crime.

When members of Congress complained that a felony was too harsh, House Judiciary Committee Chairman James Sensenbrenner put forward an amendment in December to reduce the proposed penalty to a misdemeanor.

This shows what a setup the felony issue was: Only eight Dems voted to reduce the penalty, and the amendment failed by a 257-164 vote. U.S. Rep. Zoe Lofgren, D-San Jose, announced that she opposed the misdemeanor amendment because: “In one stroke, it would subject the entire undocumented population, estimated by some to be 11 million people, to criminal liability.” So the Dems stuck with the felony language.

And, it looks like democrats are getting the plenty of help with this from the media as CNN reported the story this week:

The Democratic Party website is giving the Republicans a few licks and creating small level panic over the wording of the bill:

“…But anyone found helping an illegal immigrant in any way, even a church ministering aid, could literally be convicted of a crime.”

But, Hillary Clinton , takes the prize for her outlandish Jesus remarks on the democratic passed House bill:

Clinton renewed her pledge to oppose a bill passed in December by the House that would make unlawful presence in the United States _ currently a civil offense _ a felony. The Senate is set to consider a version of that legislation, as well as several other bills seeking to address the seemingly intractable issue of immigration reform.

Surrounded by a multicultural coalition of New York immigration advocates, Clinton blasted the House bill as “mean-spirited” and said it flew in the face of Republicans’ stated support for faith and values.

“It is certainly not in keeping with my understanding of the Scriptures,” Clinton said, “because this bill would literally criminalize the Good Samaritan and probably even Jesus himself.”

Clinton expressed sympathy to representatives of communities along the U.S.-Mexico border that are frustrated by the stress of providing social services to large numbers of undocumented immigrants. But she also said she hoped to send a message that supporters of punitive immigration policy faced significant political risk for doing so.

That is just disgusting!