Update: The militants who were holed up in the prison surrendered to Israeli forces after 10 hours of resistance. At least nine foreigners were kidnapped in Gaza during uprising and demonstrations against Israel and the US. 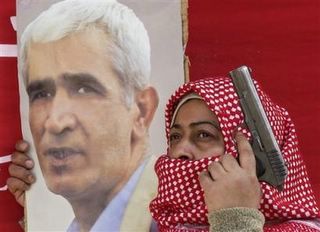 A Palestinian female member of the Popular Front for the Liberation of Palestine carries a picture of her leader Ahmed Saadat and a gun, in the Ein-el-Hilweh Palestinian refugee camp, near the southern port city of Sidon, Lebanon, Tuesday, March 14, 2006. Israeli forces driving bulldozers and firing tank shells burst into a Palestinian prison in the West Bank town of Jericho on Tuesday and pulled out dozens of inmates in their underwear in a raid targeting a group of prisoners convicted of killing an Israeli Cabinet minister. Despite Israeli threats to kill the prisoners if they did not surrender, the main target of the raid Ahmed Saadat remained defiant. (AP Photo/ Mohammed Zaatari) 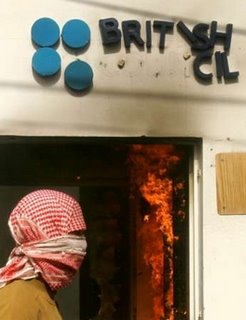 They are trying to seize militant Ahmed Saadat, blamed for the killing of a minister. He is refusing to surrender.

Palestinian leader Mahmoud Abbas has blamed the withdrawal of UK and US prison monitors for the raid.

The raid has sparked a series of clashes, protests and kidnappings of foreigners in the West Bank and Gaza.

A BBC correspondent at the prison says there has been Israeli tank and helicopter fire on the jail.

An Israeli bulldozer could be seen demolishing walls outside the prison where a number of Palestinian guards and prisoners including Mr Saadat, leader of the Popular Front for the Liberation of Palestine, are still holed up.

An Israeli army spokesman said 182 people had been taken from the prison and were being questioned, including 26 wounded.

Palestinian militants warned US and British nationals to leave Gaza at once! 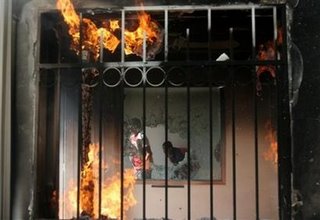 Supporters from PFLP, Popular Front Liberation of Palestine, storm and burn the building of the British Council in Gaza city Tuesday March 14 2006 in protest after Israeli forces raided a prison in the West Bank town of Jericho demanding the surrender of six prisoners inside and sparking a shootout with Palestinian police that left one Palestinian officer dead and another man wounded, Palestinian security officials said. Ahmed Saadat is being held in the Jericho prison for ordering the assassination of Israeli Tourism Minister Rehavam Zeevi in 2001. (AP Photo/Khalil Hamra)

In the wave of Palestinian unrest that followed the Israeli raid in Jericho:

* Palestinian militants from the al-Aqsa Martyrs’ Brigades in Gaza City warned US and UK nationals to leave the Palestinian territories immediately.

Palestinian Leader Mahmoud Abbas says he held the US and Great Britain responsible for the Israeli raid!