Russia’s UN mission spokesman blasted the Pentagon report released on Friday. The Pentagon report was based on documents taken from Iraq after the collapse of the Saddam Hussein regime. One translated memo addressed to a Saddam secretary from the Russian Ambassador to Iraq details US military plans on the eve of the War in Iraq…

But, it will be difficult for the Russians to slam photos of Russian military officials receiving awards from Saddam’s Defense Minister for assisting the regime days before the startup to the war. 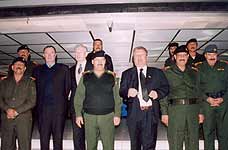 Back on October 30, 2004, Bill Gertz in the Washington Times reported on Russian connections to Iraq days before the start of the War in Iraq:

Both generals were photographed receiving awards from Iraqi Defense Minister Sultan Hashim Ahmed in early March 2003, only days before the war began on March 20, 2003. The photographs were taken in a building that was bombed by U.S. cruise missiles during the first air raids on Baghdad, the newspaper stated. 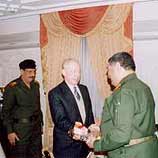 Iraqi Defence Minister Sultan Hashim Ahmed hands an award to Russian Igor Maltsev, rated as one of the best Russian experts in the sphere of operating air-defense systems. (Gazeta)

The newspaper Gazeta.ru reported back on April 2, 2003 about the awards ceremony attended by the Iraqi Defense Minister Sultan Hashim Ahmed in early March 2003:

As to why the two Soviet generals received the top military awards of the Iraqi Republic on the eve of war, Vladislav Achalov would not say. He did remark, however, that he “didn’t fly to Baghdad to drink coffee”.

Thus, one can only conjecture what role the Soviet generals have played in preparing the Iraqi army for the war. That their role was important is proved at least by the fact that both Achalov and Maltsev, as Gazeta.Ru has learnt, have visited Iraq no less than 20 times in the past 5-6 years.

Given such a schedule (3-4 trips a year), it is almost beyond doubt that Achalov and Maltsev, as well as, possibly, other retired Soviet and highly placed Russian military personnel were giving advice to Iraq as it prepared its army for imminent war.

Perhaps it is mere coincidence, but namely Igor Maltsev is rated as one of the best Russian experts in the sphere of operating air-defense systems, while Vladislav Achalov has extensive experience in the field of using rapid-reaction forces. 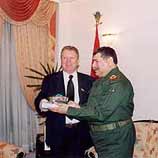 Russian ambassador to Iraq Vladimir Titorenko claimed his convoy was fired upon by crossfire between insurgent and American forces after he left Baghdad in route to Syria. The US later said it had no troops in the Baghdad suburb where the shooting took place and denied any involvement in the attack on the Russian convoy.

An Australian SAS patrol came upon the scene shortly after the shooting stopped and rendered first aid assistance. They offered to airlift the diplomats out of harm’s way, which seemed reasonable given the circumstances.

“We treated the ambassador of Russia and his colleagues from the embassy courteously and professionally, and after the appropriate checks … they were allowed to go on their way,” Australian Prime Minister John Howard

The Russians inexplicably refused the offer, despite the serious condition of a member of the party, and proceeded on to Syria, of all places and from there Titorenko was flown back to Moscow.

By Wednesday April 9 Titorenko was back in Baghdad, the Russian evacuation of the Baghdad embassy cancelled.

Gazeta.ru reported on April 9, 2003, that the ambassador’s convoy may have been carrying secret Iraqi files that U.S. intelligence wanted to seize.

Update: (Saturday 1:30 PM CST) Polipundit has amazing information posted today from his posts back in 2003. Since I had mentioned this general in my posting, this link stood out to me:

Retired Col. Gen. Vladislav Achalov, a former Soviet deputy defense minister, said he had repeatedly visited Iraq just before the war and had inspected Baghdad’s “multiple defense rings.” He said they were “impossible to break straight away,” the Interfax-Military News Agency reported…

“I believe the Americans have so far been unable to capture a single large locality because the Iraqis organized their defense using the combat experience of the Soviet army, obtained during World War II,” Achalov told Interfax-Military…

“Units of the U.S. 3rd Mechanized Division and 1st Marine Division have been worn out in combat and marches through the desert. At present, they are simply incapable of launching an offensive,” he said, adding that storming Baghdad is “out of the question” until new forces arrive.

In an office at the motor pool, troops discovered a letter from a Russian weapons firm that appears to suggest Saddam was attempting to sp
end millions of dollars expanding his conventional weapons arsenal – even as he was complaining he was unable to feed the Iraqi people because of economic sanctions.

The letter, dated July 2001 and written in broken English, is signed by Colonel General Vladislav Achalov, who identifies himself as a representative of a Moscow-based company, FTW Systems Ltd.

I am curious who the third Russian is in the picture at the awards ceremony. Any thoughts?

Pajamas Media has a roundup on Russian involvement with the Saddam regime.