Hugo Chavez wanted to make a political statement with his new Venezuelan Chavista Coat of Arms, but the joke turns out to be on Hugo. 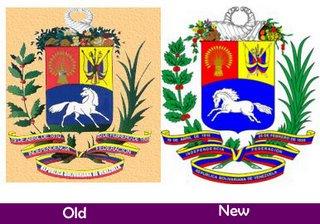 Coat of Arms comparison via Venezuela News and Views

A. M. Mora y Leon at Publius Pundit has the latest on the Chavista Regime’s move to change the Venezuelan flag and seal:

Although there were violent protests over the weekend about this change, with many in the Venezuelan opposition protesting it, and Chavista goons shooting from their motorcycles into the crowds (see the pictures here), the reaction from blogger Daniel Duquenal is one great big yawn at the egotism of the entire move. Daniel explains that Venezuela gets at least one new flag per dictator, and therefore this new flag and seal just proves the obvious.

According to his European readers in the know, Chavez screwed up the new heraldry royally! What Chavez thinks of as ‘left’ on the national shield is really RIGHT in proper heraldry.

I found the change concerning the coat of arms incredibly funny.

A Coat of Arms because they are derived from the front painting of a shield are always read from the point of view of the bearer of the shield.

In other words, previously the horse pointed to the left and looked back at the right opposition left behind. Now, the horse is not only pointing to the right, it is galloping frantically away from the left (where Chavez stands politically).

The correct description of Venezuela’s coat of arms is now: “a silver (white does not exist in heraldry) horse on blue ground, galloping to the right“ 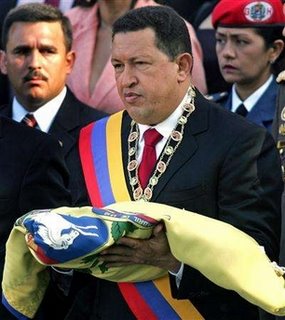 Venezuela’s President Hugo Chavez holds the country’s new flag which includes the new coat of arms as seen in this picture during a ceremony at the national cemetery in Caracas March 12, 2006. (REUTERS/Jorge Silva)

Venezuelan News and Views has much more on the new Chavista flag and Coat of Arms.

And, A. M. Mora y Leon is still laughing.

Elepahnats in Academia has more on Hugo’s new coat of arms.
The Coalition of the Swilling has more pictures.