In a radio interview the Nation of Islam official told the Jews who quit the Illinois Anti-Discrimination Panel that “They need to come back or shut up!”
VIDEO HERE

“For those who try to condemn me because of the Honorable Minister Louis Farrakhan’s remarks on Saviours’ Day, which were perceived by some as anti-Semitic, it’s ridiculous, absolutely ridiculous… He is my minister, of whom I love and respect, and he will remain my minister until Allah decides differently”

The Nation of Islam warned it will sue if Claudette Marie Muhammad is removed from the Illinois Anti-Discrimination Panel. Democratic Governor Rod Blagojevich is standing behind her appointment. The governor did not know she was a Nation of Islam official when he appointed her(?). 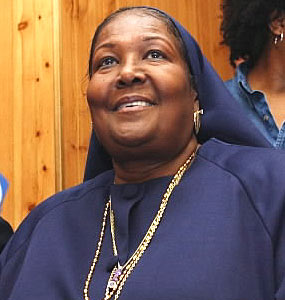 Democratic Gov. Rod Blagojevich appointed Muhammad to the commission in August. She was under the radar until she invited other commissioners to attend a Farrakhan speech last month. The governor says that he was not aware that she was a Nation of Islam official when he appointed her but will keep her on the commission:

Criticism of Muhammad mounted after Farrakhan’s Chicago speech, which included references to “Hollywood Jews” promoting homosexuality and “other filth.”

Farrakhan’s chief of staff, who serves as an informal adviser along with other city ministers to Chicago Police Supt. Phil Cline, told radio listeners that the Nation of Islam forgave the people who quit the governor’s commission. “You left out of confusion. You misunderstand what the commission is all about. Come back to the commission and debate your point,” Leonard Muhammad told the departed panel members.

Later, he issued a stronger challenge. “They need to come back or shut up,” he said.

“And leave me alone,” Claudette Muhammad chimed in…

“Please know I am not the victimizer here, OK, but instead I am the victim,” she said.

Blagojevich said Monday that Muhammad was not responsible for Farrakhan’s remarks. He also has said he didn’t realize he had appointed a Nation of Islam official until learning about it from news reports.

Nation of Islam officials on Tuesday praised Blagojevich for supporting his nominee but said they would have considered legal action if he hadn’t.

Callers to Tuesday’s radio show included the Rev. Michael Pfleger, the white pastor of a mostly black Chicago church and a friend of Muhammad’s.

Pfleger said “good riddance” to the people who had left the commission.

“Leave, go ahead and go on out, we don’t need that kind of a spirit or mentality and a narrowness on that kind of commission. I’m glad they’re gone,” Pfleger said.

Shockingly, local Jews were upset that Farrakhan was using anti-Semitic language to promote his “Synagogue of Satan” book and lectures:

The four Jewish members who resigned from that panel think she should have renounced Farrakhan’s Savior’s Day remarks. They began criticizing her presence on the panel after Farrakhan’s speech Feb. 26 in Chicago that included references to “Hollywood Jews” promoting homosexuality and “other filth.”

Members of the Jewish community have said they were offended when Farrakhan referred to wicked Jews and used expressions like the “synagogue of Satan.”

Louis Farrakhan was voted the BET Person of the Year for 2005.

The Illinois Human Rights Campaign, a gay activist group, has been strangely silent on the discriminatory comments by Farrakhan. However, the Illinois Log Cabin Group, a conservative gay group, is asking the governor to remove Claudette Marie Muhammad from the Hates Crime Panel.