By their vote last week, the UN guaranteed that at least one non-free or partially free country will be setting Human Rights policy for the rest of the Free World. Funny, this is exactly the reason why the last council earned its contemptible reputation.

There are currently 89 free countries in the world and 103 countries that are not free or are partly free according to Freedom House. These countries will continue to decide on Human Rights issues at the United Nations.

Following are highlights (Via the Carter Center and Reuters):

* The Human Rights Council is to have 47 seats compared with 53 in the current Human Rights Commission.
* It will be a subsidiary body of the 191-member General Assembly rather than the 54-nation Economic and Social Council.
* Members will be elected by secret ballot in the General Assembly by a majority vote of all members, not just those present and voting. Currently, members are approved in the Economic and Social Council according to a slate by regional groups.
* Members are elected for three-year terms. After serving six years, they cannot be re-elected immediately.
* The new council will meet a minimum of 10 weeks a year but can be called into session in case of emergency. The current commission meets six weeks a year.
* The new council is to conduct periodic reviews of the human rights records of all U.N. members, beginning with those elected to the council. A systematic violator of human rights could be suspended from the council by a two-thirds vote of the General Assembly. There is no such review now.
* The seats would be distributed among regional groups: 13 for Africa, 13 for Asia, six for Eastern Europe, eight for Latin America and the Caribbean and seven for a block of mainly Western countries, including the United States and Canada. 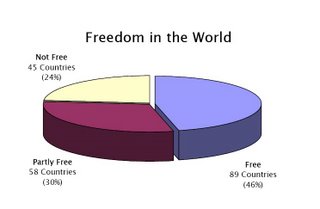 Currently, according to Freedom House, there are 89 free countries in the world and 103 countries that are not free are partly free.

So what of these changes?

– The first several points from the above list of changes do absolutely nothing to ensure that non-free and partially free nations are kept off the council.

– The last point guantees that at least one country on the panel will not be a free nation.

In the “new look/old look council”, 13 seats will be distributed to African nations. Currently in Africa there are 25 non-free nations, 29 partly free nations and only 12 free nations according to the 2006 Freedom in the World Report by Freedom House.

Here is what Freedom House had to say about the new look council:

The draft resolution simply does not go far enough to ensure that governments that are the world’s worst human rights offenders are kept off of the Council. After all, it is the recurring presence of countries such as Libya, Cuba, China, Belarus, Zimbabwe, Pakistan and Egypt on the existing Human Rights Commission that has helped it earn the contemptible reputation it enjoys today.

The Commission has justifiably become an object of derision, rather than a source of pride for those who believe in the ideals contained in the UN Charter and the Universal Declaration of Human Rights. Courageous human rights defenders from around the world too often find themselves subjected to interrogation and obstruction by member states at the Commission. The world’s democracies are often unable to carry the day in Commission deliberations, settling for tepid resolutions on human rights violations or, more often, no diplomatic action at all.

Secretary General Annan’s proposal that members of the Council be elected by a 2/3 vote of the General Assembly – so that egregious human violators could more easily be excluded – was lost in the negotiating process. Although the current text includes language encouraging members to elect only those states “with strong human rights records,” there is no concrete mechanism preventing notorious human rights violators from sitting on the Council. 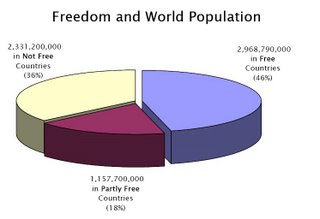 Freedom in the World (Freedom House)

Jimmy Carter actively campaigned AGAINST the US government and got his wish as the UN overwhelmingly passed approval of the revamped and utterly inadequate Human Rights Council on Wednesday, March 15, 2006.