“They acted with indescribable cruelty. They kept him naked and tied up for weeks. They cut him and in the end poured flammable liquid on him and set him alight.”

The Cold-Blooded Murder and Humiliation of Ilan Halimi 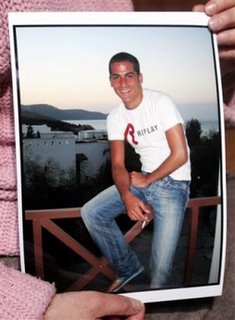 New Information on the Torture and Death of Ilan Halimi Supports:

* The gang threatened several prominent businessmen, lawyers and even the founder of Medecins Sans Frontieres
* The Director of Arte TV was targeted
* Ilan was lured by a “honeypot”, attractive Audrey Lorleach, who lured men on dates and passed them off to the French “Barbarian” Gang
* Audrey says she does not know what happened to the men but led police to where he was kept
* The murderers of Ilan Halimi had connections with Hamas, the terrorist group leading the Palestinians
* Ths may be the first act of Hamas terrorism directed against a Jew outside of Israel
* Suspects said they tortured Ilan with particular cruelty simply because he was Jewish
* Relatives and neighbors, beyond the immediate circle of the gang, were told about the Jewish hostage and dropped in to participate in the torture!
* Ilam Halimi was kept naked for weeks during his torture and up to his death
* The way that Ilam Halimi was tortured and murdered was not just an Anti-Semitic crime, it was not just kidnapping… it was horrible physical, emotional, and sexual abuse!

The gang that kidnapped, tortured and brutally murdered Ilan Halimi, 23, had threatened several prominent businessmen, lawyers and a well-known humanitarian activist, a French newspaper reported Saturday. The daily Liberation reported that the group behind the murder, which authorities have linked to anti-Semitism, tried to extort money from a founder of Medecins Sans Frontieres, or Doctors Without Borders. Also targeted were the director of the Arte TV channel, a Paris lawyer and the head of a supermarket chain, the newspaper reported, citing police officials.

Ilan Halimi was abducted on January 21 after a woman came into the mobile phone store where he worked and charmed him into a dinner date. The first break in the case came after the police released an Identikit image of the woman suspected of “baiting” Halimi. After turning herself in our of fears that neighbors would identify her, the woman claimed that she was indeed asked to seduce a number of young men, but was unaware of the act’s purpose. She identified the apartment where Halimi had been kept.

Halimi was found on February 13, tied to a tree, naked, wounded, handcuffed, gagged and covered with burn and cut marks on 80 percent of his body. Authorities found Halimi near railroad tracks in the Essonne region south of Paris a few days after the kidnappers ended contact with Halimmi’s family. He died en route to a hospital… 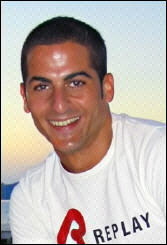 Police found 23-year-old Ilan Halimi naked, handcuffed and covered with burn marks in Bagneux, south of Paris. He died on his way to a hospital.

…According to a recent article on this subject by Caroline Glick written in the Jerusalem Post and reported at The Belmont Club, she states, “It appears that Ilan Halimi’s murderers had some connection to Hamas. Tuesday, French Interior Minister Nicolas Sarkozy said that police found propaganda published by the Palestinian Charity Committee or the CBSP at the home of one of the suspects. The European Jewish Press reported this week that Israel has alleged that the organization is a front group for Palestinian terrorists and that in August 2003 the US government froze the organization’s US bank accounts, accusing it of links with Hamas.”

It is clear that the French authorities remain callous and indifferent when it comes to Jews being murdered on their soil or anywhere else. This attitude was evidenced in their initial denial that anti-Semitism played a role in this murder and their expressed policy of ignoring any evidence of anti-Semitism.

This may be the first act of Hamas terrorism directed against a Jew outside of Israel, but clearly it won’t be the last. Everyday, we are being saturated with the anti-Semitic diatribes of an Iranian President named Ahmadnajed, of Hamas leaders and leading intellectuals. We can no longer deny it. Anti-Semitism is in full swing. It can only get worse.

For years now we have heard from human rights groups that the nakedness at Abu Ghraib was humiliating for a people who are very private and humble. They are “different” in that they are very sensitive about their nakedness. 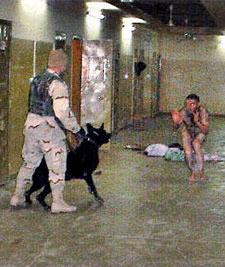 Last month we heard an uncorroborated expose by an ex-guard on how a Guantanamo female interrogator withdrew her hand from her pants with red marker on it and wiped it on a prisoner pretending it was blood.

Human Rights Watch, the American Civil Liberties Union and Amnesty international all moralized on these accounts of abuse.

Wiping red marker on a person is one thing.
Torturing a man naked in a basement for several weeks is another.

Yet, where is that human rights outrage against this horrendous crime in France?

It is time we hear from these rights groups on the Anti-semitic and brutal physical, emotional, and sexual abuse of Ilan Halimi!

It’s times like these that you need a good doctor like Dr. Helen, Shrinkwrapped or Dr. Sanity to explain this horrible animalistic abuse and the resulting reaction to the abuse.

Previously:
Ilan Halimi, Lured by a Woman into an Anti-Semitic Deathtrap
French Killers Called Relatives Over to Help Torture the Jew!