Bangladesh has emerged as the second front of Islamic terror in South Asia over the last five years. At least one Muslim group is demanding that the terrorists be punished. 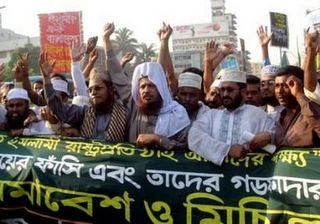 Bangladeshi Islamists chant slogans during a protest in Dhaka March 21, 2006. Bangladesh Islamic Front, an Islamic religious organisation, held the protest on Tuesday to demand punishment for Islamic militants accused of bomb attacks in the country in the past months. At least 30 people were killed and more than 150 wounded in bomb attacks by the militants of two outlawed Islamist groups since August 2005. Police have arrested five top leaders and some 1,000 militants including suspected suicide bombers since then. (REUTERS/Mohammad Shahidullah)

There are reports of over 100 terrorist camps in southern Bangladesh near the Indian border:

Many Islamic radical groups, some with links to Osama bin Laden led al-Qaeda, have set up their training camps in the country along with about 18 terrorist groups that are active in North-east India.

There are nearly 200 camps, mostly close to the Indian border, of these terrorist and fundamentalist organisations inside Bangladesh.

As Winds of Change reported, the US has asked all Peace Corps voluteers to leave Bangladesh out of fear that Americans will become targets for Islamic extremists.

Bangladeshi blogger Rezwan says there were plots by a banned Islamist organization to kill the volunteers.

Winds of Change has several more posts on the JMB militants behind the previous terrorist attacks in Bangladesh and who were recently arrested. 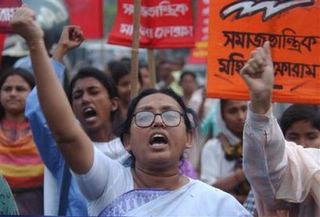 In an earlier protest this month… Bangladesh Samajtantric Mohila Forum activists, a left-winged women’s party, shout slogans during a protest in Dhaka, Bangladesh, Friday, March 10, 2006. The protest was held to urge people to resist Islamic fundamentalism in the country. (AP Photo/Pavel Rahman)

On August 17th of last year, several hundred homemade bombs went off simultaneously in numerous cities throughout Bangladesh.
Arrested bombers were thought to have links to Al Qaeda.
On November 29, 2005 10 people were killed in the country’s first suicide bombing.

Update: Inside Orkut has images of a Muslim protest against terror from a cell phone in London!