“The mainstream media has lost its way of supporting the United States of America when they are at war,” said Nancy Hecker, mother of Maj. William F. Hecker III, who was killed in Iraq in January, who grew up in St. Louis and now resides in Vienna, Va. 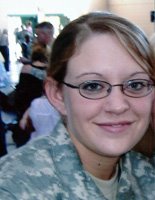 Army Spc. Amanda Pinson from St. Louis was killed in a mortar attack on a base near Tikrit. In high school Amanda was a fixture on the homecoming court, several sports teams and the student council.

The St. Louis Post Dispatch interviewed several families of fallen soldiers for their Sunday article published in the local news section. Many of the families including the family of Army Spc. Amanda Pinson do not want the death of their loved one to be in vain:

The family of Army Spc. Amanda Pinson, who was killed in a mortar attack on a base near Tikrit last week, sought comfort in supporting their daughter’s steadfast belief in her mission.

“We honor her beliefs,” said her father, Tony Pinson. “I would not have wanted her to die in vain.”

Amanda Pinson, 21, of south St. Louis County, posthumously received the rank of sergeant Saturday, her family said. The Department of Defense had not publicly announced Pinson’s death by late Saturday. Pinson’s friends from Hancock High School described her as the all-American girl. She was a fixture on the homecoming court, several sports teams and student council.

Since the war began three years ago Sunday, at least 33 members of the U.S. military killed in Iraq had lived in the St. Louis region.

Plenty of pundits and protesters will be in the media spotlight on this anniversary. Cheryl Blaise of Macon, Mo., said her family rarely watches the news when it concerns Iraq.

Blaise’s stepson, Chief Warrant Officer Michael Blaise, was killed in Iraq in 2004. She summed up the feeling of many parents: “I think we’ve invested too many lives, too much money and too much time to pull out when the job isn’t done.”…

…”I wasn’t in favor of going in in the first place,” said Stephen Belchik of Staunton. “I wasn’t at all convinced of all of the reasons. But now that we’re there, we have to finish it.”

Belchik, who lost a son in Iraq, said the country should be stable before troops withdraw. His son, Marine Cpl. Christopher Belchik, was killed in a mortar explosion in Iraq’s Anbar province in August 2004.

Several of those interviewed criticized the media’s coverage of the war, saying it focused too much on the negative stories and failed to report the accomplishments. Nancy Hecker, mother of Maj. William F. Hecker III, who was killed in Iraq in January, says she was disgusted by the media attention given to anti-war activist Cindy Sheehan, who lost her son in the war.

“The mainstream media has lost its way of supporting the United States of America when they are at war,” said Hecker, who grew up in St. Louis and now resides in Vienna, Va.

A local military spouse wrote in with these comments on the media’s coverage of the war:

This article is right on the nose. If the media would report the correct news instead of trying to make a story, the percentage of America’s support of our troops being over there would be overwhelming. As a military spouse, I don’t even waste my time watching the news regarding Iraq. I have not talked to one soldier including my husband who is there now who does not believe we are making a difference.

No, my husband does not want to be over there away from family and the everyday amenities we have here, (who in their right mind would?), but we know this is part of the job. If you want my opinion, all these “anti-war” demonstrators who have every comfort feature of life should get their own personal tour of Iraq complements of Uncle Sam. If the media would really report the news, they would show that the Iraqi Army is doing alot of missions with just our support.

You can’t topple a regime and expect it to be perfect in 3 years. If you look at history, World War II lasted 6 years and if you ask any German about World World II today, they do not talk about it, it is not a period of time they are proud to be associated with and are embarassed by it and that was over 60 years ago and I’m sure the majority of Iraqi people feel the same way about Saddam today.

Well, sorry about the soapbox, but as a spouse, you get tired of the mainstream American public not hearing the whole story. Keep supporting and praying for the troops and the mission. That’s the one thing they really need everyday and the prayers are working.

Thank you Rhonda and thanks to your husband for his service!

Update: And, then there is Cindy Sheehan.