From a recent news release:

State Representative Colonel Jack Jackson (USMC-Ret.) saw it happen to young servicemen when they came home from Vietnam in the 60’s and 70’s. “Back then some of our veterans came home from war only to find their families unable to get the help and support they needed to make it through rough times; I will not let that happen again.” Representative Jackson (R-Wildwood) who is Chairman of the House Veteran’s Committee will join with Pat Rowe Kerr, Ombudsman for the Missouri Veteran’s Commission to start a fund called “Operation on Spirit’s Wings” to raise money for the family of Air National Guard Master Sgt. Rhys Wilson of Savannah Missouri.

Wilson recently returned from active duty in Iraq after his wife Therese was diagnosed with 4th stage neuro-endocrine cancer which will require extremely intense and expensive treatment, much of which will not be covered by health insurance.

The couple has 6 children. Nine year old daughter Charlsi has an extra valve in her heart that will also require extensive treatment and their oldest son, 19 year old Trent is a Marine Corps Lance Corporal now deployed in Iraq. Ombudsman Rowe Kerr says Therese’s basic treatment will require shots that cost $6,000 per month some of which is covered by insurance, however the family must pay for the injections in advance and wait for reimbursement from insurers. Additionally, Kerr says the treatment that gives Therese the best chance to recover is only available overseas. “The treatment overseas alone will be $20,000, which does not include lodging or airfare; we need to raise at least $30,000 as soon as possible.”

Colonel Jackson says there are several bills and programs which have been approved or are under consideration to help returning vets like the Military Family Relief Fund and the “J-Vet”, Jackson Veterans Employers Tax Credit Bill, but says this family needs even more help. “We never stop trying to find ways to help through legislation but sometimes it’s just not enough; sometimes the situation is so desperate we all need to open our hearts and offer hope any way we can.”

Please help out if you can.
For more information you may contackt [email protected] 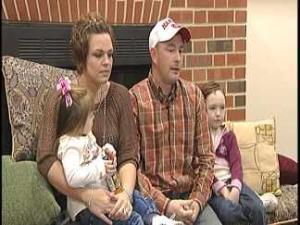 Jack Jackson helped push legislation in Missouri to help those returning from active duty including Sergeant Justin Dietiker of Perryville, Missouri. Justin returned home from military service but could not find a steady job that provided his family with health insurance benefits. His 6 year old daughter, Hope has Cystic Fibrosis, his 3 year old daughter Isabell has a cleft pallet, and then he learned his wife Terri has cancer.

And, Representative Jack Jackson received some good news himself this week:

One of the most respected and influential figures in Missouri Republican politics says he has no doubt who is the best candidate for Missouri State Auditor; Mel Hancock gave his strong endorsement to State Representative Colonel Jack Jackson (R-Wildwood).

Jack Jackson has done some great work in Missouri in helping veterans in need.

Donations may be sent to:

I have asked and am not aware of an internet account set up for donations.