The Mexican Government is running full page ads on US immigration policy in at least three major US newspapers this week. These controversial ads:

* Demand that Mexico participate in designing American immigration policy
* Propose that illegal immigrants become fully integrated into US communities
* Propose that Mexico will do its part at the borders if the guest country offers a sufficient number of appropriate visas to cover the largest possible number of workers and their families.

The government of Mexico took out full page ads in the New York Times, Washington Post and Los Angeles Times in the last week to ipromote its bilateral immigration reforms and improve its image in the states. 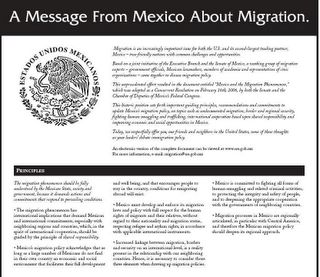 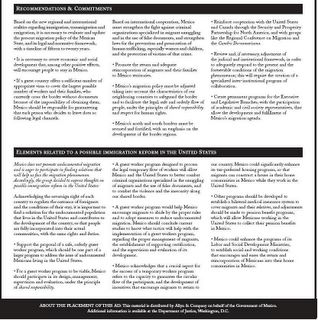 Here are a few points from the advertisment from the Mexican Embassy in Washington DC:

* Mexico’s migration policy acknowledges that as long as a large number of Mexicans do not find in their own country an economic and social environment that facilitates their full development and well being, and that encourages people to stay in the country, conditions for emigrating abroad will exist.

* If a guest country (that would be the US) offers a sufficient number of appropriate visas to cover the largest possible number of workers and their families, who currently cross the border without documents because of the impossibility of obtaining them, Mexico should be responsible for guaranteeing that each person who decides to leave does so following legal channels.

* Acknowledging the sovereign right of each country to regulate the entrance of foreigners and the conditions of their stay, it is important to find a solution for the undocumented population that lives in the United States and contributes to the development of the country, so that people are fully incorporated into their actual communities, with the same rights and duties.

* Support the proposal of a safe, orderly guest worker program, which should be one part of a larger program to address the issue of undocumented Mexicans living in the United States.

* For a guest worker program to be viable, Mexico should participate in its design, management, supervision and evaluation, under the principle of shared responsibility.

And, as timing would have it, news of undercover agents successfully slipping dirty bombs across both the northern and southern border made headlines tonight.