“As tragic as the recent events in Iraq are, the silver lining is that it has brought to the fore the sectarian tensions in Bahrain and the need to resolve them before the situation gets out of hand. I hope that the civil and political societies make use of this momentum to achieve tangible and permanent changes.”

These Incredible Pictures are from Montadayat.org 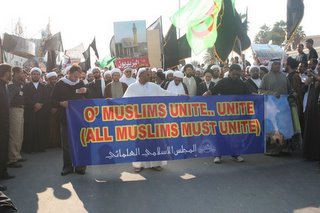 Chan’ ad Bahraini on the massive unity protest in Bahrain after the Golden Mosque bombings:

It comes as no surprise that the recent sectarian violence in Iraq would have repercussions here in Bahrain. Both countries have a Shia majority but have been politically dominated by the minority Sunnis; and both countries are now trying to establish themselves as something that looks like a democracy. 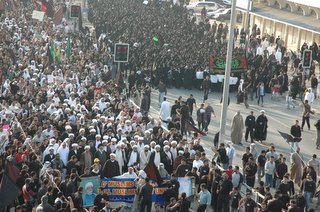 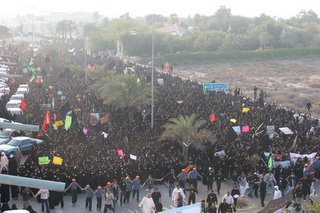 Rather than stressing the victimization of the Shia, Shaikh Isa Qassem in his speech highlighted the solidarity between Sunnis and Shias. 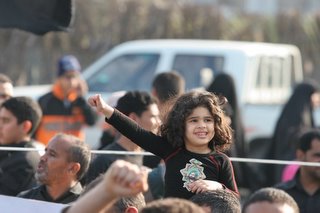 And there were lots of people with placards (like the one below) and chanting slogans of “No Shia, no Sunni. All of us denounce the exclusivists(terrorists)” 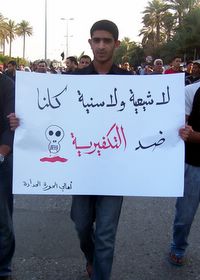 Chan’ ad Bahraini has much more on the significance of this protest. 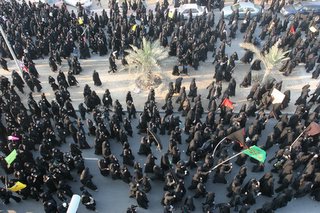 Montadayat.org has many picutres from the massive protest here and here.

Irish Pennants shares his concern that, “We must not miss there are many Muslims that share our values.”

Update: Freedom for Egyptians writes in:

The first banner reads: “The Islamic Secular Council”. I do not know how Islamic and Secular at the same time, but nice.

The meaning of banner on the image before the last because I could not imagine literal translation says: It is not about being a Sunni or Shiite, we are ALL against “Takifiryia”. This newly used word means the release and applying the extremist religious fatwas or opinions given by Al Qaeda terrorist leaders that calls for the destruction of killing of anyone that goes aganist their ideology that they claim pertains to Islam. Jim, I am only explaining here the idea but not translating the banner word for word. It is much shorter.