North Korea again threatened the US with “grave consequences” on Monday if the US proceeded with its joint military operations with South Korea this week.

But, the US does not need to worry right now about North Korean threats. It looks like North Korea is stalling until Bush leaves office. 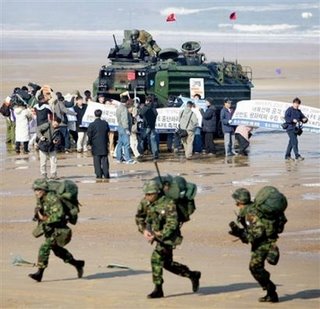 South Korean protesters block a U.S. Marine landing craft that comes ashore on a beach as South Korean Marins soldiers pass them during a South Korea and U.S. joint military exercise at the Taean, west of Seoul, Thursday, March 30, 2006. South Korea and the United States kicked off their annual joint military exercises, dubbed RSOI and Foal Eagle, on Saturday amid angry protests by North Korea, which has denounced them as saber-rattling for a pre-emptive nuclear attack on the communist country. The banner reads Oppose dubbed RSOI and Foal Eagle exercise’,(AP Photo/Ahn Young-joon)

On Monday North Korea reminded the US that it had the capability to launch a pre-emptive attack on the United States:

About 25,000 U.S. troops and an undisclosed number of South Korean soldiers are participating in the weeklong exercise, dubbed RSOI and Foal Eagle, which began Saturday. South Korea and the United States say the drill is purely defensive.

“The U.S. should know that a pre-emptive strike is not its monopoly,” the North’s main Rodong Sinmun newspaper said in a commentary carried by the official Korean Central News Agency. “The U.S. should take full responsibility for grave consequences that the reckless war exercise will bring about.”

The commentary did not spell out what those “grave consequences” were. Statements made by the North’s state-controlled media are strictly in line with the government’s position and often precede official pronouncements.

“Our army and people are turning out as one in the sacred anti-U.S. struggle with burning hatred for the U.S. imperialist aggressors and the unshakable resolution to take revenge upon them,” Kim was quoted as saying during a Saturday visit to a military unit. 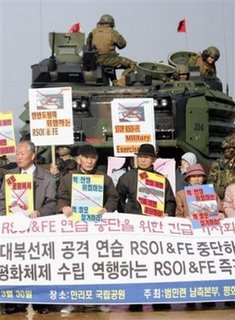 South Korean protesters block a U.S. Marine landing craft that comes ashore on a beach during a South Korea and U.S. joint military exercise on the beach at the Taean, west of Seoul, Thursday, March 30, 2006. (AP)

As US Marines charged ashore for exercises on Thursday, anti-war, Anti-US protesters met them on the beach:

The marines, carrying assault rifles and their faces camouflaged, spread out across the beach and took positions.

The massive landing exercise, involving about 700 marines and about 40 amphibious vehicles, was a centerpiece of the weeklong exercise between the U.S. and South Korean militaries. 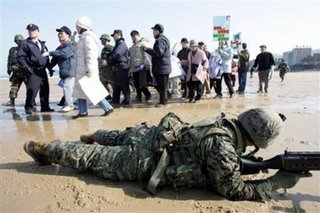 A U.S. Marine looks back at South Korean protesters in the landing operation during a South Korea and U.S. joint military exercise on the beach at Taean, west of Seoul, South Korea, Thursday, March 30, 2006. (AP)

Bloggers at Korea Liberator are getting some attention of late. It appears that someone is accusing them of being a front for the CIA!