Dozens of women had bought tickets and hoped to cheer on the Iranian National team, were all banned from entering Tehran’s Azadi Stadium last Wednesday. 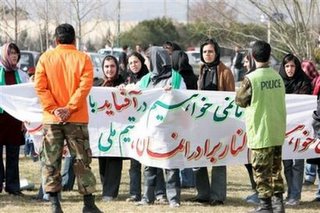 Iranian police officers stand as Iranian girls hold a banner sign which reads in Persian ‘We want to watch a match of our national soccer team’ as they wait to enter the Azadi stadium during a world cup friendly match between Iran and Costa Rica in Tehran, on Wednesday March, 1, 2006. Iranian women are not allowed to attend actual matches of the men’s teams which are held in the coliseum. Iran won 3-2.(AP Photo/Hasan Sarbakhshian)

Iranian women were again escorted from a sporting event in Tehran:

The action took place on the opening day of the tournaments as fans gathered in Tehran’s 12,000-seater Azadi indoor stadium to watch the international gymnasts compete.

Little more than 10 minutes after the start of the games, intelligence officials from the government’s sports institution entered the stalls of the arena and demanded that all women exit the facility.

Among those asked to leave were several female translators for the international teams that were competing on the day.

President Mahmoud Ahmadinejad has been enforcing the hard-line government rules since he took over last year. 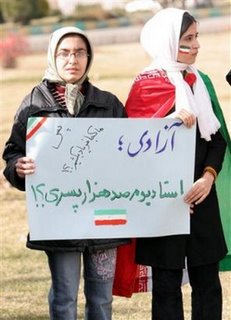 Iranian gilrls hold a banner and Iran’s national flag which reads in Persian ‘Freedom, where we should shout?’ as they wait to enter Azadi stadium during a world cup friendly match of Iran and Costa Rica in Tehran, on Wednesday March, 1, 2006. (AP Photo/Hasan Sarbakhshian)