In a historic visit to India, President Bush signed a nuclear agreement with the billion member democracy to share nuclear reactors, fuel and expertise with this energy-starved nation in return for its acceptance of international safeguards and hailed trade relations.

Not every Indian, though, was happy to see the US Leader…

Not impressed with free trade agreements, Indian communists found a unique way to welcome the American President to their homeland. 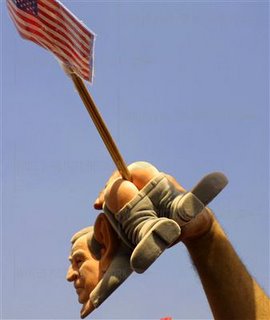 A man holds a toy mouse with the face of US President George W Bush in a protest in New Delhi, India, Thursday March 1, 2006. (WPN)

A group of Muslim men had a message for Bush. 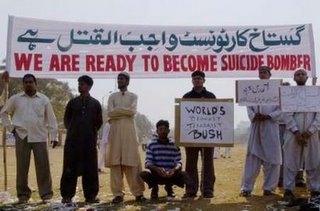 Bush hailed the US and India as global leaders. His address to the nation was broadcast across India.

A protest against the visit to India by Bush turned into a clash Friday between Hindus and Muslims that left one person dead and 12 injured in Lucknow, India, after violence erupted during a demonstration against U.S. President George W. Bush, on Friday, March 3, 2006.

Osama was sited at one of the high teck communities. 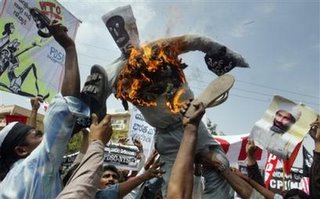 Protestors beat a burning effigy of U.S. President George W. Bush as another holds a poster of Osama bin Laden during a demonstration against Bush in Hyderabad, India, Friday, March 3, 2006. Chanting ‘Bush hands off India’ and ‘Bush go home,’ several hundred communist and Muslim demonstrators marched through the city, and shops in the Muslim-dominated Charminar neighborhood were closed in protest. There was heavy security all over Hyderabad, one of India’s burgeoning high-tech centers, as Bush arrived in the city on the second stop of his visit to India. (AP Photo/Gautam Singh)

Radical Muslims and communiists joined in protest against Bush over his visit to India. 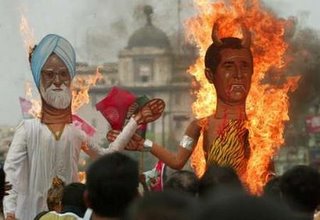