As Senator Joseph Biden warns that Iraq may move from “low-grade” Civil War to “full-blown” Civil War, millions of Shia worshippers gathered in Karbala to complete 40 days of symbolic mourning for Imam Hussein. 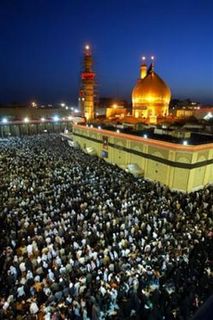 Iraqi Shiite Muslims offer evening prayers at the Shrine of Imam Hussein, in Karbala, 80 kilometers (50 miles) south of Baghdad, Iraq, Monday, March 20, 2006. A million Shiite Muslim pilgrims descended on the holy city of Karbala to mark the 40th and final day of mourning for Imam Hussein, the Prophet Muhammad’s grandson on Monday, who killed in Karbala in 680 A.D., as thousands of Iraqi security forces braced for possible sectarian attacks. (AP Photo/Hadi Mizban)

Reuters explains the bad news today about the “low-grade, with potential to be full-blown, Civil War”, this way:

Instead of celebrating the success of their Iraq venture, Washington and its allies have been on the defensive, insisting that Operation Iraqi Freedom launched three years ago to the day will end in victory, although when is less certain than ever.

“Transiting from tyranny to democracy is never smooth or easy,” said Australian Prime Minister John Howard, one of America’s main allies in the war.

Iraqi Prime Minister Ibrahim al-Jaafari said: “We have suffered during the past year … The road ahead will be tough.”

But in an article in the Washington Post, he added: “The world should not falter at such a crucial stage in history.”

Meanwhile, millions of Shiite worshippers continued their pilgrimage to Karbala:

Five Shiite pilgrims headed to Karbala were the victims of a drive-by shooting in an attack by assailants with automatic rifles in the town of Iskandariyah, 30 miles south of Baghdad. All were injured, police said.

As millions of pilgrims gathered in Karbala Monday to complete 40 days of symbolic mourning for Imam Hussein, the Prophet Muhammad’s grandson, the Baghdad International Airport was ordered closed through Tuesday “to avoid any violence during the (religious) commemoration,” said Transportation Ministry spokesman Ahmed Abdul-Wahab. 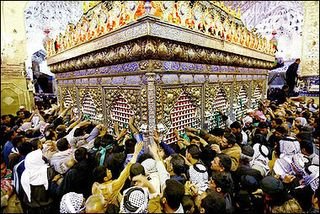 Iraqis vie to touch the tomb of Abul Fadel al-Abbas, one of the religious leaders of Shiites in the southern city of Karbala. Iraq marked the third anniversary of the US-led invasion with a fresh spate of killings, a deadlock over the new government and warnings of civil war as Shiites gathered in the south for a major religious ceremony.(AFP/Ahmad al-Rubaye)

Iraq the Model answers the question after three years in Iraq, “Was it the right decision to remove Saddam?”

Lori Byrd at Polipundit says it will be a sad week of “Was it worth it?” and Civil War reporting.