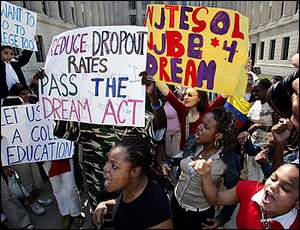 Students and supporters of immigrant rights yell during a rally in front of the New Jersey Statehouse in Trenton yesterday in support of proposed state and federal legislation that would allow some immigrant children without legal U.S. residency to attend state colleges and universities at in-state tuition rates. (AP)

The Courier Post Online wrote a great fluff piece on why the DREAM ACT legislation should be passed in New Jersey:

For hundreds of undocumented high school students like Mayra Medina, their American dream is for Congress to approve the DREAM Act.

The Development, Relief and Education for Alien Minors Act was introduced in 2002 to help students who are living in the United States illegally but have graduated from high school and want to attend college. The proposal would grant temporary status to qualified immigrants (and state funding), which could eventually lead to lawful permanent residence and citizenship.

“This year, once again, hundreds of undocumented students will graduate from public school and will not have the chance to attend college,” said Carlos Avila of the Immigrant Public Advocacy Coalition of Trenton. 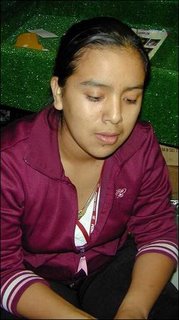 Mayra Medina, 16, an undocumented high school student in Camden, hopes she can attend college in the U.S. (Courier Post Online)

More on the Dream Act from The National Council of La Raza:

If passed, the ÂDevelopment, Relief, and Education for Alien Minors (DREAM) Act,Â S. 2075, a bipartisan federal proposal led by Senators Richard Durbin (D-IL), Chuck Hagel (R-NE), and Richard Lugar (R-IN), would facilitate access to postsecondary educational opportunities for immigrant students in the United States who currently face barriers in pursuing a college education. The ÂDREAM ActÂ would also allow hardworking immigrant youth who have long resided in the U.S. the chance to adjust their status, enabling them to contribute fully to our society.

The “DREAM Act” was introduced in the U.S. Senate in November 2005. Senator Richard Durbin (D-IL) is the sponsor of the bill, and the lead Republican cosponsors are Senators Chuck Hagel (R-NE) and Richard Lugar (R-IN). The Senate Judiciary Committee must now consider and approve the “DREAM Act” before the bill can be considered for a vote by the full Senate. Similar versions of this bill garnered significant support from both Democrats and Republicans last Congress when it was approved by the Senate Judiciary Committee with a 16-3 bipartisan vote. In addition, last year, 48 senators and 153 representatives signed on in support of the “DREAM Act” and its companion bill in the U.S. House of Representatives.

The House version of the “DREAM Act”, which has been championed by Representatives Chris Cannon (R-UT), Howard Berman (D-CA), and Lucille Roybal-Allard (D-CA), currently awaits reintroduction.

The Anchoress has far more forgiving beliefs on the immigration situation.