Those Dem-Hawks have had it!
Dennis Kucinich and Barbara Boxer are packing heat and a united Warrior Left is gonna kick some OBL A$$!

Mark your calendars. Today is a historic day. Democrats are announcing today, four-and-one-half years after 9-11, that THEY have saved a can of Whoopass for the jihadists! Well, Alright!

Congressional Democrats promise to “eliminate” Osama bin Laden and ensure a “responsible redeployment of U.S. forces” from Iraq in 2006 in an election-year national security policy statement.

In the position paper to be announced Wednesday, Democrats say they will double the number of special forces and add more spies, which they suggest will increase the chances of finding al-Qaida’s elusive leader. They do not set a deadline for when all of the 132,000 American troops now in Iraq should be withdrawn.

“We’re uniting behind a national security agenda that is tough and smart and will provide the real security George Bush has promised but failed to deliver,” Senate Minority Leader Harry Reid, D-Nev., said in remarks prepared for delivery Wednesday.

His counterpart in the House, Rep. Nancy Pelosi, D-Calif., said the Democrats are offering a new direction – “one that is strong and smart, which understands the challenges America faces in a post 9/11 world, and one that demonstrates that Democrats are the party of real national security.”

This, of course, is a new direction for the Dems. We are assuming that they they have put aside for now beliefs that:

Because as we all know, Our military and their families are stretched thin… The Army is broken.” Fighting another front would be too much for them. 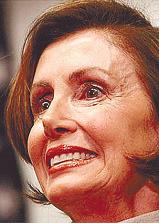 Here’s a quick look at the Dem plan:

* Eliminate Osama bin Laden-
Even though they have a long legacy of ignoring threats. (Look out for lobbed bombs! Clear the aspirin factories!)

* Responsible redeployment of U.S. forces-
This must be the the Murtha redeployment plan of relocating troops to Okinawa to fight the War on Radical Islam.

* Double the number of special forces-
Democrats cut military spending 7 out of 8 years that Clinton was in office, the only spending that democrats hate.

* Their plan not set a deadline for when all of the 132,000 American troops now in Iraq should be withdrawn-
Yet, the Democrats are the ones pushing for a timeline to withdrawal of forces!

Wizbang notes the national security heavy weights who will be attending today’s press conference. Not exactly a “Who’s Who” of Kicka$$ !
Dr. Sanity wrote a poem for the occasion.
Don Surber has a picture of their “defense is #1” campaign poster.
All Things Beautiful has an undercover Democratic Spy Photo.
Punditguy says it is a one man focused plan.